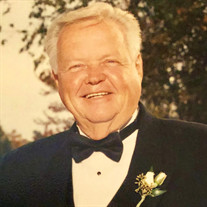 North Hampton – Paul Stuart Marston, 75, a lifelong resident of North Hampton, passed peacefully surrounded by his family and friends on Tuesday, July 31, 2018 at Portsmouth Regional Hospital. He was born in Exeter on January 5, 1943, the youngest son of the late Curtis D. and Louise (Webb) Marston. A 1960 graduate of Winnacunnet High School, Paul then went on to proudly serve in the NH Army National Guard. Paul was a self-made man and the definition of a serial entrepreneur: starting the former Abercrombie & Finch Restaurant, Candia Woods & The Oaks golf courses, Abenaqui Carriers, and many other real estate and business ventures. He enjoyed playing cards with his friends and was an avid golfer, having memberships at both Abenaqui Country Club, where he served as past president, and Portsmouth Country Club. However, nothing was more important to him then time spent with his family; he especially cherished his roles as "Uncle Paul" and "Grampy". The family of Mr. Marston would like to thank his caregiver, Lolita Williams, his best friend, Charlie Dupont and all the lifelong friends that came to visit and support him. Surviving family members include: his devoted wife of 54 years, Mary Lou (Guerrera) Marston of North Hampton; son, Curtis Anthony Marston and his partner Wendy Souther and family (Shawn, Aleigh & Lexi) of Greenland; son, Paul Joseph Marston and his wife Yvonne (Commenator) of Rye, grandchildren, Charlotte and Joseph Marston; along with several loving nieces, nephews and cousins. In addition to his parents, Paul was predeceased by his brother, Alan Marston. Visiting hours will be held from 4 to 7 PM on Sunday, August 12, 2018 at the Remick & Gendron Funeral Home, 811 Lafayette Road, Hampton, NH 03842. A mass of Christian burial will be celebrated at 10 AM on Monday, August 13, 2018 at St. Theresa Church, 815 Central Road, Rye Beach, NH 03871. Burial will follow at the Center Cemetery, North Hampton. Relatives and friends are respectfully invited. In lieu of flowers donations may be made to the American Heart Association ,PO Box 417005 Boston, MA 02241-7005.

The family of Paul S. Marston created this Life Tributes page to make it easy to share your memories.