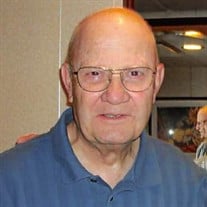 Exeter - Paul Gerard Mayotte, 87, of Exeter, formerly of Lowell, MA, husband of Jean A. Mayotte, passed away at home Wednesday, January 27, 2021. Paul was born in Lowell November 7, 1933 to the late Louis Mayotte and the late Lillian Frenette (Provencher). Paul grew up in Lowell, MA and attended St. Louis De France School. He served in the U.S. Navy from 1954—1958 on the Yosemite AD19 as a Molder Second Class. Following service in the Navy he was employed by Meade Foundry in Bedford, MA for many years and later at Ferrous Technology of Lawrence. After retirement he worked as a part-time employee of St. Isidore Church in Stow, MA. Paul enjoyed working with wood and making treasures for his grandchildren. He is survived by his wife of 33 years Jean (Whitman) Mayotte and two sons, David Mayotte and wife Cathy, and Michael Mayotte, also four daughters, Sr. Gail Mayotte SASV, Anne-Marie Carney and husband Michael Carney, Debra Mayotte and husband Robert Martin and Brenda-Lee and husband Richard Riker and 8 grandchildren. Paul is also survived by four step-children: James Kilroy, Jr. and wife Maria, Steven Kilroy and wife Miranda, Ann Whitman, and Lynn Beals and husband Jamie and 12 step-grandchildren. He was predeceased by his wife of 24 years, Claire Rondeau in 1982, his brother Andrew Mayotte and half-sister Constance Suprenant. A Mass of Christian Burial will be celebrated at 11 AM on Monday, March 15, 2021 at Sainte Marguerite d'Youville Church, 1340 Lakeview Ave., Dracut, MA 01826. Masks are required and social distancing must be maintained.

The family of Paul G. Mayotte created this Life Tributes page to make it easy to share your memories.

Send flowers to the Mayotte family.