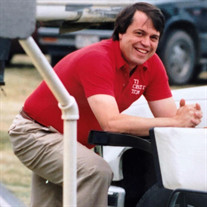 Stratham - Paul B. Montana, 73, passed away on Thursday, May 7, 2020, holding hands with his loving wife, at their home in Stratham. He succumbed after a long and courageous fight with metastatic prostate cancer. He was the son of Paul R. and Louise A. Montana of Claverack, NY. In addition to his beloved wife, Carol (DeAngelo) Montana, Paul leaves behind son Thomas H. Montana of Lee, FL, (Layla Bakehorn) and their children, Kane and Kameron; a daughter Sarah Jane Elizabeth Montana (Allyson) of Cumberland, RI and their children, River Wolf and Jovie Moon and a son Joseph P. Montana of Oakland, CA. Before moving to New Hampshire, he and his family lived on the waterfront in Rockport, MA and in upstate NY. He graduated from Berkshire School in Sheffield, MA and Utica College of Syracuse University, where he then worked as Assistant Director of Admissions and Director of Alumni Relations. Later he moved to Columbia Greene Community College in Hudson, NY, filling various positions including Director of College Services and Executive Assistant to the President. His next career was as president of the family business Valley Oil in Claverack, NY which he transformed from a small fuel oil company into a multi-million dollar company building 15 convenience stores throughout the Hudson Valley. Selling Mobil, Citgo and Shell products he served on many industry and civic advisory boards and panels. During that time he was a partner (with Lance Wheeler) in the regional advertising agency The Creative Team which specialized in political and tourism accounts. After selling those businesses he ran the Cameo Talent Agency in Boston before returning to the petroleum business as a consultant. Although his success as a businessman was of great pleasure, it was his service to the community and others that gave him his greatest joy. A volunteer fireman, a youth baseball coach, president of the Chamber of Commerce, a republican state committeeman and Chairman of the Columbia Greene Community Foundation were some of the positions he filled. Perhaps most fulfilling was his service to the less fortunate over 20 years and in three conferences of St. Vincent de Paul in Rockport, MA, Exeter and Hampton, NH. Founding advocacy programs, he also served various board positions and on special committees while continuing to volunteer at the food pantries and other functions. (Matthew 25:40). During the last years of his service he was Chairman of the Raymond Simon Institute for Public Relations and Journalism at Utica College, an alumni board that funded 27 scholarships and awards and presented educational forums for students and recent graduates. He was awarded the college's Key Award for his service in 2019. One of his proudest accomplishments was "Forever & Always" the romantic novel he wrote about a nurse in San Francisco, selling over 1000 paperback and kindle versions. Paul was a passionate and dedicated man, whose loyalty to family, friends and causes was in a class of its own. He carried every endeavor to its rightful conclusion, no matter the difficulty. A man of confidence and conviction, always ready to move in the right direction for the good of others. In addition to his family Paul leaves behind good friends Gerry Maturi, James Campion, Joan Koweek, Andrea Renz, Tony Concra, Wayne LaMalva and more. Due to the recent pandemic, all services will be private. In lieu of flowers Paul, requested donations to St. Vincent de Paul of Hampton 289 Lafayette Rd., Hampton, NH 03842 or the V Foundation for Cancer Research.

Stratham - Paul B. Montana, 73, passed away on Thursday, May 7, 2020, holding hands with his loving wife, at their home in Stratham. He succumbed after a long and courageous fight with metastatic prostate cancer. He was the son of Paul R. and... View Obituary & Service Information

The family of Paul B. Montana created this Life Tributes page to make it easy to share your memories.