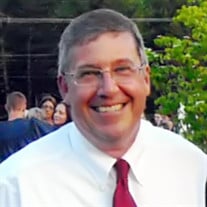 Kingston – Paul E. Nadeau, 58, of Kingston passed away on September 30, 2018 from injuries sustained in a boating accident off Rockport, MA. Paul was born in Boston, MA on January 14, 1960, the son of Patricia (Day) Nadeau of Burlington, MA and the late Edwin T. Nadeau, Jr. Raised in Winchester, MA, Paul attended McCall Junior High, where he was a Bombardment legend, and graduated from Winchester High School with the Class of 1979, where he played on the varsity soccer and baseball teams. He went on to earn his Bachelor’s Degree in Finance from UMass Amherst and upon graduation, accepted a position with the Federal Reserve Bank of Boston, where he worked for 32 years before retiring in 2015. Paul met the love of his life, Kris Ellen Westerhoff in 1980 while working together at the Sheraton Regal Hotel in Hyannis, MA. They were married in May 1985 on Cape Cod. The young couple settled in Beverly, MA to raise their family before moving to Kingston in 1998. Paul was a hard-working man and devoted to his family. Indeed, family was the most important part of his life. He loved the outdoors, and from his youth he was drawn to the water, especially being on the ocean fishing with his friends, his family or by himself. He had always been athletic and played soccer, baseball and racquetball. He relished time with his sons Nicholas, Daniel and Thomas whether it was watching their sports games, working in the yard, camping, being on the slopes and in the warmer months waterskiing and boating on the lake. He volunteered his time with the Boy Scouts of America as an Assistant Scout Master for his sons’ troop and strongly supported his family’s church, the Church of Jesus Christ of Latter-Day Saints of Exeter, and had many friends in the congregation, even though he himself was not a member. Paul also enjoyed spending time with his family at a cottage in Maine they rented every summer. He was a New England Patriots fan and spent most Fall Sundays watching the games with his wife in his favorite comfy chair. Left to cherish Paul’s memory are his wife, Kris, his sons, Daniel of Utah and Thomas of Kingston, his mother, Patricia Nadeau of Burlington, MA, his sister Ann Clark and her children Keith and Heather of Roanoke VA, his brother, Mark Nadeau of Tewksbury MA and his sister, Jane Bates, her husband, Rich and their children Zach and Sarah of Woburn, MA. He also leaves his mother-in-law, Loretta Westerhoff of Andover, MA, his in-laws, Frank and Marilyn Westerhoff of Wellesley, MA, Erick Westerhoff and Gretchen Westerhoff, both of Dallas, TX and numerous aunts, uncles, cousins, nieces, nephews and many close, lifelong friends. In addition to his father, Paul was predeceased by his eldest son, Nicholas T. Nadeau, in 2013. Knowing that a joyous reunion has just taken place in heaven brings comfort at this time. Visiting hours will be from 4 to 7 PM on Monday, October 8, 2018 in the Remick & Gendron Funeral Home-Crematory, 811 Lafayette Road, Hampton. Services will be held at 10 AM on Tuesday, October 9 at the Church of Jesus Christ of Latter-Day Saints, 55 Hampton Falls Road, Exeter, with a reception following at the church. Burial will follow at 2:30 PM Tuesday at Brooks Memorial Park Cemetery, State Road, Eliot, ME. In lieu of flowers, the family suggests donations to The General Mission Fund (www.LDSPhilanthropies.com/Missionary), 15 E. South Temple, 2nd Floor East, Salt Lake City, UT 84150 or Troop 337 of the Daniel Webster Council - Historic District (www.nhscouting.org), 571 Holt Ave., Manchester, NH 03109.

Kingston &#8211; Paul E. Nadeau, 58, of Kingston passed away on September 30, 2018 from injuries sustained in a boating accident off Rockport, MA. Paul was born in Boston, MA on January 14, 1960, the son of Patricia (Day) Nadeau of Burlington,... View Obituary & Service Information

The family of Paul E. Nadeau created this Life Tributes page to make it easy to share your memories.

Kingston – Paul E. Nadeau, 58, of Kingston passed away on September...

Send flowers to the Nadeau family.