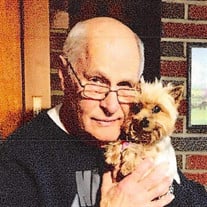 Exeter – Paul Lee Richard, 80, of Exeter, passed away peacefully on Wednesday, June 14, 2017 at his home surrounded by loving family. Paul was born in Defiance, OH on June 24, 1936, a son of the late Ora and Wilma (Jackman) Richard. He graduated from Defiance High School with the Class of 1955 and in 1955 began his 24 year career with the United States Air Force. Paul retired from the Air Force and then worked another 24 years with the United States Post Office in Hampton. He always had a smile on his face. Paul was a faithful man who loved his Lord and loved his church. He treated the people in his Bible Study Group at Hampton Falls First Baptist Church like they were family members and he cherished times with the group. Paul held an unconditional love for his family and some of his happiest moments were spending time with his children and grandchildren. Paul is survived by his wife of over 20 years, Phyllis (Prescott) Willis Richard of Exeter; his son, Lee Richard and his daughter Kelley Warren of Seabrook; his eight grandchildren, Nicholas Lombardi and Noah Poole, Gary, Kimberly and Kirsten Murdock, and Andrew, Samantha and Nicole O’Barton; his stepdaughters, Renee O’Barton and her husband Marc of Exeter and Danielle Murdock and her husband Gary of Chichester; his brothers, Bill and Daniel Richard and his sister Janice Prece. In addition to his parents, he was predeceased by his siblings, Edwin, Bettey, Larry, Jim, Ronald and baby Richard and his first wife and mother to his children, Jeanne (Lombardi) Richard. Visiting hours will be held from 4 to 7 pm on Monday, June 19, 2017 in the Remick & Gendron Funeral Home – Crematory, 811 Lafayette Rd., Hampton. Services will be held at 11 am on Tuesday at the First Baptist Church of Hampton Falls, 3 Lincoln Ave., Hampton Falls, NH 03844. Graveside services will be held at 3 pm at the Calvary Cemetery, Rt. 33 in Portsmouth. Family and friends are respectfully invited. In lieu of flowers, memorial donations may be made to Paul’s church at the above address.

The family of Paul Lee Richard created this Life Tributes page to make it easy to share your memories.

Send flowers to the Richard family.