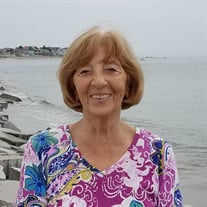 Colebrook – Pauline A. MacKinnon, 83, of Colebrook, passed peacefully with family by her side on Thursday, June 11, 2020 at her daughter’s home in Hampton. She was born in Berlin, December 15, 1936 a daughter of the late Sylvio and Yvonne (Valliere) Ottolini. Pauline was raised in Berlin and graduated from St. Patrick High School with the Class of 1955. She married Richard L. Roy and had three children, Steven, Ellen and Laurie. She moved to Hampton in 1978 and was employed as a bookkeeper with National Gypsum in Portsmouth. Pauline later married Daniel MacKinnon and moved to Colebrook where she lived for 36 years. She had a home business selling knitting machines and yarns and also worked at Hicks Hardware Store and the Balsam Resort for many years. Pauline and Dan loved traveling by car throughout the country and visited most states. They also spent several winters in Las Vegas where her sister and brother lived and enjoyed the sunny weather and a little gambling too. After the death of her husband Dan in 2000, she started square dancing and met her longtime companion Richard David. They summered in Colebrook and wintered in Florida for many years until health issues prevented her from traveling. Pauline enjoyed being around people, both at work and home. She loved music and played the organ at the catholic and episcopal churches in Colebrook. She also played the piano for family and friends at her home. She also enjoyed playing golf with her many friends in Florida as well as going to bingo with her friends in Colebrook. But most of all, Pauline loved her family. She spent as much time as possible with her children, grandchildren and great grandchildren, all of whom she adored. Family members include her son, Steven Roy and his wife Deborah of Rutland, VT, her daughter, Ellen Dennett and her husband James of Hampton with whom she resided, her sister, Barbara Robichaud of Milton, her five grandchildren; Alyssa, Gregory and Nicholas Roy, Nicole Starr and Natasha Wilber, four great grandchildren; Kalea Starr, Carter and Alina Wilber and Hazel May Phillips. She is also survived by the father of her children, Richard L. Roy of Errol and several nieces and nephews. She was predeceased by her husband, Daniel MacKinnon, her daughter, Laurie Ann Reola, her brothers, Frederick and Joseph, and her sisters Dorothy Aubin and Margaret “Peg” Arguin. A Mass of Christian Burial will be celebrated at 12 PM on Friday, June 19, 2020 at Our Lady of the Miraculous Medal Church, 289 Lafayette Rd., Hampton. Those attending should be aware that a limited number people will be allowed in the church and masks will be required. Mass will be live streamed at https://www.olmmparish.org/live-streaming.html. A graveside service will be held at 2 PM on Friday, July 17, 2020 in the Colebrook Village Cemetery, Colebrook, NH. In lieu of traditional remembrances, donations may be made to American Red Cross, PO Box 37839, Boone, IA 50037-0839.

The family of Pauline A. MacKinnon created this Life Tributes page to make it easy to share your memories.

Send flowers to the MacKinnon family.