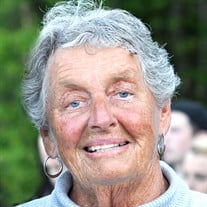 York, ME – Pauline Frances MacGregor, 88, of York, and formerly of Rye, NH, passed away peacefully on Monday, January 16, 2017 at her home, surrounded by her family. She was born in Salem, MA on November 23, 1928, the only child of the late Howard R. and Pauline (Jackman) Wiley. Poppy was raised in Boston, attended the former Girl’s Latin School and graduated from Cambridge Academy in 1947. She married Malcolm G. MacGregor in 1948, and they settled in Sandown, NH, where they raised their five children. They relocated to Rye, NH in 1970 and Poppy moved to York in 1985. Poppy was a Licensed Practical Nurse and had worked at the Hale Hospital in Haverhill, MA for 30 years before retiring in 1992. After her retirement, she continued to enjoy her lifelong passion for knitting and following the local jazz scene every Tuesday night at “The Press Room” in Portsmouth, NH. Living near her daughter Hannah, “Bammie” was also able to spend time with her beloved grandchildren and be a part of their lives as they grew up. She is survived by her son, Malcolm G. MacGregor, Jr. and his wife Theresa, of Durham, NH; her daughters, Martha Lardent and her husband Craig of North Hampton, NH, Hannah MacGregor of York, ME and Amanda MacGregor Peirce of Brookfield, NH. She also leaves her grandchildren, Jennifer Hall of Dover, NH and Elizabeth Hall of York, ME and her devoted and loving, longtime companion, Kenneth Bassett of Sandown, NH. In addition to her parents and ex-husband, Poppy was predeceased by her son, Allan MacGregor. A “Celebration of Life” will be held from 11 am to 1 pm on Tuesday, February 7, 2017 at the Remick & Gendron Funeral Home, 811 Lafayette Rd., Hampton, NH. Family and friends are respectfully invited. Burial will be private beside her parents and Allan in Monumental Cemetery, Peabody, MA. If desired, memorial donations may be made to Hospice of York, 15 Hospital Dr., York, ME 03909.

The family of Pauline "Poppy" MacGregor created this Life Tributes page to make it easy to share your memories.

Send flowers to the MacGregor family.