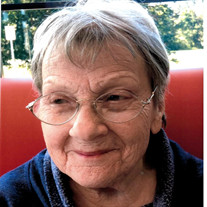 Rye Beach – Pauline A. Rabchenuk, 81, of Rye Beach, died Saturday, January 27, 2018 at Watson Fields Assisted Living in Dover. She was born April 6, 1936 in Salem, MA, a daughter of the late Armand and Liana (Richard) Pariseau. Raised in Salem, MA she graduated from Salem, High School. Mrs. Rabchenuk was employed by the former Portsmouth Telephone Answering Service, Data General and retired from Liberty Mutual as a telephone receptionist. Pauline moved to Rye in 1963 coming from Salem, MA. She was a communicant of St. Theresa Church, enjoyed reading, gardening and in her earlier years enjoyed tennis and bowling. She shared 54 years of marriage with her late husband Henry C. Rabchenuk who predeceased her in 2012. Family members include two daughters, Sharon Dwyer of Baltimore, MD, Janice Rabchenuk of Barrington, five grandchildren, Miriah, Liam, Julia, Samuel and Morgan. She was also predeceased by her sister, Lucille Libby. Private services and burial will be in the Central Cemetery, Rye. Arrangements are by the Remick & Gendron Funeral Home-Crematory, Hampton.

The family of Pauline A. Rabchenuk created this Life Tributes page to make it easy to share your memories.

Send flowers to the Rabchenuk family.