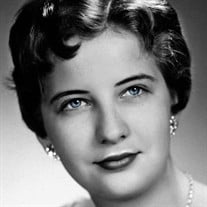 Rye - Mrs. Peggy Ann Roper, 81 of Rye, passed away peacefully on Friday, September 15, 2017 at her home, with her sons by her side. Peggy was born August 6, 1936, in Martinsburg, W.Va. to Martin Luther Romesberg, and Irene Elizabeth M. Romesberg. Mrs. Roper was preceded in death by her husband, Dr. Lee Howard Roper, on October 16, 2008. Family members include three sons and their wives, Brian Roper and wife Wendy of Gilford, Martin Roper and wife Michele of Arlington, OH and Mark Roper and wife Rachel of Cornish; five grandsons, Justin, Aaron, Noah and wife Vanessa, Lucas and Marcus; and her sister, Donna Lee Furry of Hagerstown, MD. Growing up, Peggy spent much of her childhood on her Grandmother and Grandfather Swope’s farm in Hagerstown, Maryland. Following high school in Martinsburg she earned her B.A. from the University of Maryland where she met her husband Lee, of Rye. In 1958 she graduated from Maryland and was married the next day. Following her graduation, she stayed with Lee while he attended dental school in Maryland, and while he served in the military at Loring Airforce Base in Maine. They returned to Rye permanently in 1962 so Lee could establish his dental practice and Peggy could raise her growing family. Peggy loved dogs and the SPCA in Stratham would call her when one needed a home. On several occasions Lee would come home from work and without his knowledge there would be a new dog that she adopted greeting him at the door. Many of the dogs she adopted were abused, or abandoned by the previous owners but with her love and care they all became wonderful pets. Peggy’s death was preceded by her beloved dogs Lucky, Noir, Mocha, Caper, Chauncey, and Pierre. Peggy cherished family gatherings and would begin planning a menu months in advance. Often, she would have a party theme like Bermudan, or a Hawaiian. Regardless of the theme the amount of food involved was usually substantial and enough to feed an army with the more leftovers the better. She cared deeply for her friends and her family. Peggy was thoughtful and caring, and had a huge heart helping people out whenever she could. She always put everyone else’s problems ahead of her own. Even very recently when she was diagnosed with cancer her concern was that everyone else was going to be ok. There will be no visiting hours or public memorial service per Peggy’s request. In lieu of flowers, the family requests instead that donations be made to the SPCA, 104 Portsmouth Avenue, Stratham, NH, 03885 or to a cause you are passionate about.

Rye - Mrs. Peggy Ann Roper, 81 of Rye, passed away peacefully on Friday, September 15, 2017 at her home, with her sons by her side. Peggy was born August 6, 1936, in Martinsburg, W.Va. to Martin Luther Romesberg, and Irene Elizabeth M. Romesberg. Mrs.... View Obituary & Service Information

The family of Peggy Ann Roper created this Life Tributes page to make it easy to share your memories.

Send flowers to the Roper family.