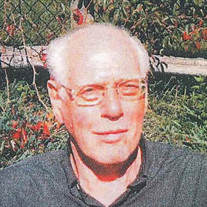 North Hampton – Professor Peter Dodge of North Hampton, formerly of Wadleigh Falls in Lee, passed away Sunday, November 7, 2021 at Portsmouth Regional Hospital just 5 days shy of reaching his 95th birthday. He is survived by his wife Pat Moreinis Dodge of North Hampton; sons Timothy Dodge (Karen) of Camp Hill, Alabama; Christopher Dodge of Burlington, Kentucky; and stepson Bram Moreinis of Greenfield , Massachusetts. He was preceded in death by his first wife, Renata de Kanicky Dodge (well known in Lee); his sister, Diana Dodge Josselson; and parents, Martin Dodge and D'Etta Dodge Green. Peter was born on November 12, 1926 in New York, New York where he grew up and spent many a summer enjoying Camp Pemigewassett here in New Hampshire. He was a graduate of Horace Mann High School, New York (1943); Swarthmore College (1948); and received a Ph.D. in Sociology from Harvard University (1961). Pete served in the U.S. Army in 1945-46. He was a Professor of Sociology at Harpur College (Binghamton, N.Y.) 1959-1963 before continuing his career teaching this subject at the University of New Hampshire 1963-1996. He resided in Durham (1963-67); Lee (1967-1996); and North Hampton (1996-2021). Pete was a Fulbright Scholar in Belgium (1954-56), later spending a year in Sao Paolo, Brazil (1968-69) on a research sabbatical, as well as an additional year even later spent as an exchange faculty member which he split almost evenly between Cambridge, England and Cardiff, Wales (1972-73). Music, especially classical music, was one of Pete's main interests and was one that he most thoroughly enjoyed. In retirement he found great pleasure when joining and participating in the Newburyport, MA Choral Society. It might be noted that he concurrently became a member of the U.N.H. retired faculty club while also serving as the 1948 class agent for his beloved alma mater, Swarthmore College. Private services will be held at the convenience of the family. Arrangements are by the Remick & Gendron Funeral Home-Crematory, Hampton.

The family of Peter Dodge created this Life Tributes page to make it easy to share your memories.

Send flowers to the Dodge family.