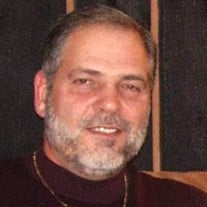 North Hampton – Peter J. Smith, III, 68, of North Hampton, died March 4, 2022 at Exeter Hospital after a sudden illness. He was born in Amesbury, MA April 22, 1953 a son of the late Peter Smith, II and Margery (Ouellette) Smith. Peter was raised in West Newbury, MA and graduated from Pentucket Regional High School in West Newbury with the Class of 1971. He was a veteran serving with the US Marine Corps. After his discharge from the Marine Corps he graduated from Leslie University in Boston in 1983 and later from the New Hampshire Police Academy. He worked as a police officer with the Dover Police Department for a brief time and then spent 13 years with the Hampton Police Department as a supervisor and prosecutor. He then moved on doing landscaping, then owned a bread and baked goods delivery route. He also worked as a bus driver for the former Bruce Transportation Bus Company, a commercial truck driver for Abenaqui Carriers for 12 years and recently at McDonalds in Hampton. In his earlier years he excelled as an athlete especially basketball with the men’s league in the Newburyport area later playing semipro basketball as well as with the US Marine basketball team. He coached for the Hampton Youth Association was an avid marksman and gun enthusiast. He leaves his wife Sheryl (Butler) Smith of North Hampton, his son Cameron Smith and his daughter Mikaela Stanley and her husband Michael and their children, Ella, Michael II, Cameron, Victoria and Lucy all of Hampton, his brother Michael Smith of North Hampton, two step children Christian Frank of Superior, CO, Samantha Campbell of Norfolk, VA, a niece, nephews and his canine friend Sugar. He was predeceased by his brothers Paul and Mark Smith. Visiting hours will be from 2-4 P.M. Sunday, March 20, 2022 at the Remick & Gendron Funeral Home-Crematory, 811 Lafayette Road, Hampton. Relatives and friends are respectfully invited. In lieu of traditional remembrances donations may be made to Semper FI Fund

The family of Peter J. Smith, III created this Life Tributes page to make it easy to share your memories.