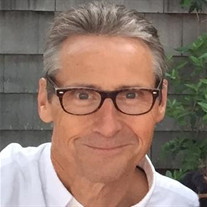 Your friend and our loving husband, father, brother, and uncle, Peter Bardin Weiler, passed away on Wednesday, July 3, 2019. He was 64 years old. Peter was born to Patricia Bardin Steady and Robert P. Weiler in Hartford, CT, and grew up in Burlington, VT with his siblings Bob and Patrick Weiler, Jeannie McCurdy, and Sean Steady. In high school, Peter was the recipient of the Hackett Award, presented annually to a student that excelled as a leader in athletics at Burlington High School. Peter went on to become a two-sport collegiate athlete, competing on both the swim team and football team at the University of Vermont. He graduated from UVM with a BS in psychology in 1977, and a master’s degree in higher education administration in 1979. Peter was a trusted and respected colleague, accomplished fundraiser, and life-long devotee of public higher education. Peter was passionate about his work and particularly devoted to creating opportunities for students of all backgrounds to access higher education. Peter’s career spanned multiple well-respected institutions including UCLA, the University of Vermont, Penn State University, the University of New Hampshire, Ohio State University, and the University of Maryland. While at Penn State, Peter was awarded with an honorary degree in 1995, and the Kevin A. Steinberg Memorial Award, honoring a supporter of Penn State’s dance marathon. Peter planned and executed multiple billion-dollar fundraising campaigns throughout his career. Most importantly to him, Peter spent his professional career building relationships with colleagues and donors who became close friends. While Peter had a successful and fulfilling professional career, he was equally known for his post-collegiate athletic achievements. Peter entered the triathlon world in the early 1980s, and competed in the Hawaii Ironman in ’85, ’86, and ‘87. In 1986, Peter finished in the Top 100, a personal record and professional level achievement. Years would go by as he focused on his family and work, only to return to compete in the Hawaii Ironman in 2004 and 2006. In May 2016, at the age of 61, Peter completed his first and last ultramarathon, running 55 miles through the hills of his home state of Vermont with his family in-tow. Peter was most significantly a devoted husband and father. Peter and Karen grew up together in Burlington, VT and celebrated 41 years of marriage in December 2018. Peter’s greatest accomplishment was his three children Jamie, Griffin, and Mac, who were raised in State College, PA and all graduated from Penn State. In June 2016, Peter was in a cycling accident that left him a quadriplegic. Over the last three years, although his health slowly declined, he never lost his sense of humor or persevering spirit. Peter passed away surrounded by his loving family at their home in North Hampton, NH. Peter was so grateful for the many friends and family members who supported him over the past three years. The number of people who wrote, called, visited, and expressed their love for Peter in so many ways is a true testament to the person he was. A memorial service will be held on Friday, July 12, at 10:30 am at St. Andrew’s-by-the-Sea, 30 Church Rd, Rye, NH 03870. A gathering of family and friends will immediately follow at the Atlantic Grill, 5 Pioneer Rd, Rye NH, 03870, ending at 2pm. In lieu of flowers, please consider contributing to the Peter Weiler Family Endowment in Advancement and Philanthropy. The endowment was recently created to honor Peter’s work at Penn State. Gifts can be sent to the Pennsylvania State University, 116 Old Main, University Park, PA 16802.

Your friend and our loving husband, father, brother, and uncle, Peter Bardin Weiler, passed away on Wednesday, July 3, 2019. He was 64 years old. Peter was born to Patricia Bardin Steady and Robert P. Weiler in Hartford, CT, and grew up in... View Obituary & Service Information

The family of Peter B. Weiler created this Life Tributes page to make it easy to share your memories.

Your friend and our loving husband, father, brother, and uncle,...

Send flowers to the Weiler family.