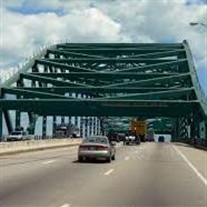 Hampton – Philip G. Pariseau, 83, of Hampton, died Saturday, August 15, 2015 after a brief illness at Portsmouth Regional Hospital, surrounded by his family. He was born in Gardner, MA September 9, 1931 a son of the late Arthur J. and Edna M. (Perry) Pariseau. Raised in Manchester he graduated from St. Joseph High School for Boys and received his Bachelor degree in Civil Engineering from the University of New Hampshire. He was a veteran of the Korean War serving with the US Army. He resided in Manchester for 59 years prior to moving to Hampton where he has lived for the past 10 years. Mr. Pariseau had a long career as a civil engineer working for the NH Department of Public Works & Highways. He retired in 1989 after 35 years of service. His proudest accomplishment while with the Department was being the lead NH Project Engineer on the Piscataqua River Bridge which connected Rte 95 in Portsmouth to Kittery Maine. Also during the course of his career he designed the bridges on the Kancamagus Highway. At the end of his career he was in charge of Special Projects which included: The Summit Building at the top of Mount Washington, The High Speed Tram going up Cannon Mountain, The Seawall at North Hampton Beach. He was a communicant of Our Lady of the Miraculous Medal Parish. He was a member of the American Rose Society and the NH Rose Society with whom he won many 1st and 2nd place awards for his beautiful roses. He was an avid fisherman and a veracious mystery reader. He also enjoyed gardening, landscaping, and boating. He could build or fix anything and after retirement had a little business called Mr. Phil’s Fix It. His family referred to him as Dr Phil because he had a cure or solution for every ailment. Since retirement he has spent most of his winters in Florida. He was a dog lover and especially loved Cocker Spaniels. He had four of them over the past 43 years. Mocha who was a huge source of joy over the past 12 years will greatly miss his Dad. He leaves his wife, Rita I. (Beaudette) Pariseau, his daughter, Cynrhia “Cyndi” L. Pariseau both of Hampton, seven stepchildren, John Lesniak, Sister Mary Thomas, Carol Lesniak, Cheryl Lesniak, Christine Fox, Joseph Lesniak, Catherine Adleman, nine grandchildren, 13 nieces and nephews. He was predeceased by his first wife, Virginia L. (Martin) Pariseau in 2002, and his 3 sisters, Edna Cacciapaglia, H. Frances Ouelette, and Claire Neveux Lambert. Visiting hours will be from 7-9 P.M. Thursday, August 20, 2015 at the Remick & Gendron Funeral Home-Crematory, 811 Lafayette Road, Hampton. A mass of Christian burial will be celebrated at 11 A.M. Friday, August 21, 2015 at Our Lady of the Miraculous Medal Church, 289 Lafayette Road, Hampton. Relatives and friends are respectfully invited. Interment will be private in St. Joseph Cemetery, Manchester. In lieu of flowers donations may be made to either Dana Farber Cancer Institute, PO Box 849168, Boston, MA 02284 www.dana-farber.org/gift or Catholic Charities New Hampshire, 215 Myrtle Street, Manchester, NH 03104-4354 www.nh-cc.org/donate.

Hampton &#8211; Philip G. Pariseau, 83, of Hampton, died Saturday, August 15, 2015 after a brief illness at Portsmouth Regional Hospital, surrounded by his family. He was born in Gardner, MA September 9, 1931 a son of the late Arthur J. and... View Obituary & Service Information

The family of Philip G. Pariseau created this Life Tributes page to make it easy to share your memories.