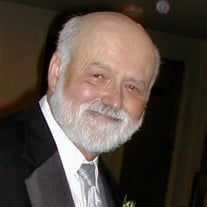 Portsmouth – Phillip Edmond Bourgeault, 78, of Portsmouth and formerly of Hampton and Stratham, passed away peacefully on Wednesday, February 9, 2022 after an extended illness. The family is grateful to the Edgewood Centre staff and Beacon Hospice for the care and comfort they provided. Phil was born in Exeter on June 15, 1943, a son of the late Albert and Isabelle (Thompson) Bourgeault. He was raised in Hampton and graduated from Winnacunnet High School with the Class of 1961. He enlisted in the United States Army in 1964 and honorably served his country during the Vietnam War until 1967. Upon his discharge, he entered the Naval Apprenticeship Program leading to a position as a marine machinist, planner and estimator and engineering technician at the Portsmouth Naval Shipyard and SUBMEPP. Phil retired from government service in 1997. Not one to stay idle, Phil returned to the shipyard as a contractor and retired for a second time in 2019. A real outdoorsman, Phil enjoyed camping, hiking, hunting and fishing whenever he got the chance. He served as a Range Officer at the Hampton Rod and Gun Club and was a member of the Major Waldron Sportsmen Association of Barrington. He leaves behind his two children with Susan Rice, his former wife; son Mark Bourgeault married to Jennifer of Newfields, and daughter Denise Douglas and husband Matthew of North Hampton. Phil loved being a grandfather to Mark and Jennifer’s children Madeleine, Josephine, Gabriel and Avery, and Denise and Matthew’s children Joshua, Jesse, Jared and Jack. They were a great source of joy. He is also survived by his brother, Ronald Bourgeault of Portsmouth and friends considered family, Jim Horan and Andrea Condon. Friends and family may visit from 5 to 7 PM on Friday, February 18, 2022 in the Remick & Gendron Funeral Home – Crematory, 811 Lafayette Rd., Hampton. Burial will be private at a later date. In lieu of flowers, the family suggests donations to New Hampshire SPCA , PO Box 196, Stratham, NH 03885.

Portsmouth &#8211; Phillip Edmond Bourgeault, 78, of Portsmouth and formerly of Hampton and Stratham, passed away peacefully on Wednesday, February 9, 2022 after an extended illness. The family is grateful to the Edgewood Centre staff and Beacon... View Obituary & Service Information

The family of Phillip E. Bourgeault created this Life Tributes page to make it easy to share your memories.

Send flowers to the Bourgeault family.