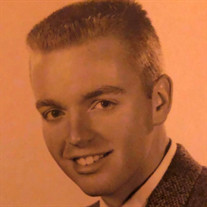 Bradenton, FL - Phillip "Phil" Lee Buell, who was born on February 12, 1938 in Muncie, Indiana and was the son of the late Floyd E Buell and the late Nina M Buell, as well as the brother of the late Jay Buell, died on January 3, 2019 in Bradenton, Florida. He was 80 years old. Mr. Buell attended University of Toledo and Denison University for college and graduated in 1960 with a Bachelor of Science degree in Psychology. He taught English, served as a Media Center Director, coached Varsity High School Boy's Baseball and Girls' Varsity Basketball and directed All-School Musicals and Dramas in Toledo, OH, Wolfeboro, NH, Groton, CT, Hampton, NH and Plaistow, NH. Phil also served as the Manager of the Rye Beach Club, Inc., in Rye Beach, NH for 17 years and with his wife, Faith, owned and operated a beautiful, bed and breakfast in Bethel, Maine. After completing a 25-year career in Education and a 23-year career in Hospitality, Mr. Buell retired to Wolfeboro, NH in 2002. He and Faith later retired to Little Compton, RI during summers to be with Phil's family and to Bradenton, Florida in wintertime where Faith's family resides. He was respected for his incredible work ethic, his unfailing loyalty, his attention to detail in everything he did and his insistence on always having perfect grammar. He loved spending time reading, baking, watching college basketball and football games and attending sporting events of all of his grandchildren. He especially loved weekly family dinners, watching his grandchildren play in the yard and telling stories all about his life and recounting his glory days of playing Varsity baseball and basketball. Mr. Buell will be remembered by his family and his friends for his quick wit, his wry sense of humor, his engaging smile and his steely blue eyes. Mr. Buell is survived by his wife Faith of 18 years of Bradenton, Florida, his daughters Jennifer Goodfriend of Little Compton RI and Allison Brady of Little Compton, RI and their husbands, Lawrence Goodfriend and Christopher Brady. Mr. Buell is also survived by his six grandchildren, Grace Lanning Goodfriend, Harrison Ross Goodfriend, Marin Lee Goodfriend, Ellie Rose Goodfriend, Evan James Brady and Teagan Phillip Brady. Mr. Buell's first wife Lynnda died in 1995 after a long battle with cancer. A private graveside service with family and friends will be held at Central Cemetery in Rye, NH. Following at a later date, a Memorial Service celebrating Phil's life will be held at the United Congregational Church in Little Compton, RI. Donations made to Kingswood Regional High School, Main Street, Wolfeboro, NH 03894 or to Denison University for their drama and baseball programs would be welcomed and appreciated.

Bradenton, FL - Phillip "Phil" Lee Buell, who was born on February 12, 1938 in Muncie, Indiana and was the son of the late Floyd E Buell and the late Nina M Buell, as well as the brother of the late Jay Buell, died on January 3, 2019 in Bradenton,... View Obituary & Service Information

The family of Phillip L. Buell created this Life Tributes page to make it easy to share your memories.

Send flowers to the Buell family.