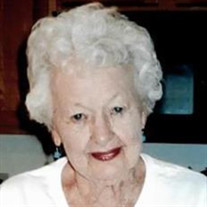 Hampton – Ramona T. Otis, 103, of Hampton, died peacefully at her home on Saturday, December 19, 2020 She was born in White River Junction, VT June 3, 1917 the daughter of the late Raymond and Florence (McCarthy) Trainor. Mrs. Otis was a 1935 graduate of Dana Hall, Wellesley, Massachusetts. She later attended Pine Manor Junior college in Wellesley and was a graduate of Erskine Junior College and the Chamberlain School in Boston. Mrs. Otis was the wife of the late Colonel Donald N. Otis, USMC who died in 1993. She traveled as a military wife for 25 years before settling in Hampton in 1965. She enjoyed golf, gardening, jigsaw puzzles, reading and especially bridge, yard sales and making “scrubbies”, pickles and relish to share with others. She worked and volunteered in various capacities throughout her life in Hampton. She worked as a practical nurse, real estate broker for the former Old Lantern and Waverly, was manager of the former Randell’s Dress Shop at Hampton Beach and served for two years as recreation director for Plimpton Nursing Home. Her volunteering activities included Exeter Hospital being the recipient of the 2500 hour pin, 20 years at the Lane Library, Seacoast Visiting Nurse Association, Well Child Clinic, crafts teacher for three years for the recreation department and served as president of the Senior Citizens Club, as well as secretary for two terms, taught craft classes to seniors for three years and wrote the senior newsletter for a year and was senior citizen correspondent to the Atlantic News. She was very active in the attempt to obtain a center for seniors and was instrumental in obtaining the room at the Lane Library that seniors currently use for various activities. Family members include one son, Anthony T. Otis of Westbrook, Maine, two daughters, Joanne Mellin of Winooski, Vermont, and Nancy Gosselin of North Hampton, three grandchildren, Tracy Stubbs Douglass of North Hampton, Pam Gleason of Hampton and Lori Stubbs of San Diego, California, three great grandchildren and two great great grandchildren. She was predeceased by her sister, Dorothy Beresford. All services will be private. The family suggests donations to The New Hampshire SPCA, PO Box 196, Stratham, NH 03885 or to a charity of one’s choice. Arrangements were by the Remick & Gendron Funeral Home-Crematory, Hampton.

Hampton &#8211; Ramona T. Otis, 103, of Hampton, died peacefully at her home on Saturday, December 19, 2020 She was born in White River Junction, VT June 3, 1917 the daughter of the late Raymond and Florence (McCarthy) Trainor. Mrs. Otis was... View Obituary & Service Information

The family of Ramona T. Otis created this Life Tributes page to make it easy to share your memories.

Send flowers to the Otis family.