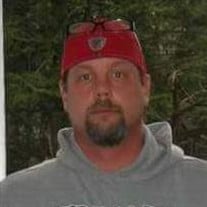 Hampton – Randy T. Ulness, 53, of Hampton, died suddenly on Saturday, April 22, 2017 at Exeter Hospital. He was born in Somerville, MA on October 29, 1963 a son of the late Angus J. and Brenda (Lucia) Cameron. Raised in Malden, MA, he attended Malden High School before staring work at Marty's Caterers in Stoneham, MA. He went on to become a kitchen manager for O’Charleys and moved to Ohio, eventually returning to Hampton, where he made his home until his passing. Randy was a talented artist who loved to draw and camp, but his great joy was spending time with his family and friends, especially his beloved daughter Alexandria. Surviving family members include his wife of 30 years Luisa Pinto-Ulness of Hampton; daughter Alexandria Pinto-Ulness of Hampton; siblings, Cheryl Bufford and her husband Tony of Inkster, MI, Jodi Kenny and her husband Doug of Hampton, Kim Bragg of Tuscan, AZ, Wade Ulness and his wife Rashetta of Haverhill, MA, Matthew Cameron of Belmont, MA and several nieces and nephews. In addition to his parents, he was predeceased by his son Dana Ulness who died in 1995 and brother Rusty Ulness who died earlier last week. Visiting hours will be held from 1 - 3 PM on Saturday, April 29, 2017 at the Remick & Gendron Funeral Home-Crematory, 811 Lafayette Road, Hampton. Relatives and friends are respectfully invited. Burial will be private. In lieu of flowers, memorial donations may be made to his wife Luisa in her time of need.

The family of Randy T. Ulness created this Life Tributes page to make it easy to share your memories.

Send flowers to the Ulness family.