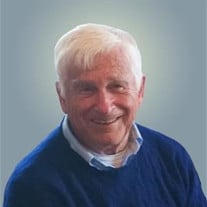 Hampton –Dr. Raymond E. Alie, 89, of Hampton, died Wednesday, March 7, 2018, surrounded by loving family. Ray was born in Dover, on September 11, 1928, the youngest of 4 brothers, to the late Albert E. and Paula (Spenard) Alie. He was raised in Dover, graduating from Dover High School in 1946. He graduated from Merrimack College in North Andover, MA in 1951 and from Massachusetts College of Optometry in 1954. Ray spent 2 years in the Air Force in Moses Lake, WA, before returning home and starting a successful career in optometry. He opened his practice in Hampton, in 1957, and worked enthusiastically until his retirement in 2011. During his career he was a pioneer in introducing his patients to contact lenses. Ray served on the parish council, was a Eucharistic minister and choir member at Our Lady of the Miraculous Medal Church in Hampton. He served on several committees for the town of Hampton and at St. Thomas Aquinas High School in Dover. He thoroughly enjoyed gardening, photography, bird watching, skiing, bicycle riding, tennis, and his annual return to Wells Beach, ME to simply sit on the porch, body surf in the waves, and float in the ocean. Ray met his wife, Irene S. (Haire) Alie at Wells Beach, ME. Together they shared 63 years of marriage. He is survived by his wife, his children: Mary Beth Camp of Silver Plume, CO, M. Bernadette Alie of Kennebunk, ME, Anne Marie Alie and her husband Thomas Hardiman Jr. of York Beach, ME and John Philip Alie of Center Conway; his grandchildren, Michael A., Melissa Rae and Murphy C. Camp all of Colorado and W. Mackenzie Camp and his wife, Estelle Michellod of Switzerland, as well as many nieces and nephews. In addition to his parents, he was predeceased by his sons, Kenneth A. Alie, and Raymond E. Alie Jr. and his brothers, Robert, Leo, and R. Normand Alie. Visitation will be from 4 to 8 P.M. Friday, March 16, 2018 in the Remick & Gendron Funeral Home – Crematory, 811 Lafayette Rd., Hampton. A mass of Christian burial will be celebrated at 11 A.M. Saturday, March 17, 2018 at Our Lady of the Miraculous Medal Church, 289 Lafayette Road, Hampton. Burial will be at 3 P.M. Saturday, March 17, 2018, in St. Charles Cemetery, Dover. In lieu of flowers, donations may be made to the St Vincent De Paul Society, 289 Lafayette Road, Hampton, NH 03842.

The family of Raymond E. Alie, O.D. created this Life Tributes page to make it easy to share your memories.