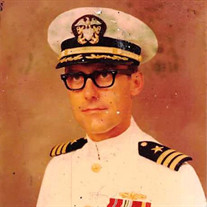 North Hampton – CDR Raymond L. Belanger, USN, Ret., 83, of North Hampton, passed away peacefully on Sunday, July 7, 2019. He was born in Salem, MA on October 27, 1935, a son of the late Louis E. and Albertine M. (Gagnon) Belanger and moved with his family to Marblehead, MA in 1939. Ray graduated from Marblehead High School in 1953 and enlisted in the United States Navy in 1954. After attending electronics technician school in Great Lakes, IL, he served at naval communication stations in Libya, Morocco and Ethiopia and served onboard USS Des Moines (CA-134). He was promoted to Chief Electronics Technician in 1961. In 1962, Ray was selected to attend Marquette University, Milwaukee, WI. He graduated from Marquette with a Bachelor's Degree in Electrical Engineering and commissioned as an Ensign. He served onboard USS Newport News (CA 148), on the staff of Commander Destroyer Squadron 32, as Operations Officer onboard USS Roan (DD 853) and Assistant Officer-in-Charge at the Naval Communications Officer School in Newport, RI. He earned his Master’s Degree in 1974 from the Naval Post Graduate School in Monterey, CA. Ray served in Vietnam in 1975 where he was awarded the Bronze Star Medal. He then served as Operations Officer aboard USS Sylvania (AFS-2) and served as a staff officer for the Tri-Service Tactical Communication Office at Fort Monmouth, NJ where he married his sweetheart Lisa and was promoted to Commander. Ray then served as Executive Officer onboard the USS Detroit (AOE-4) until 1980. He was then stationed at the NATO Communications Agency in Brussels, Belgium as program manager for NATO-4 communications satellite. In 1985 he was ordered to the Supreme Commander Allied Forces Europe Headquarters at Mons, Belgium in the communications directorate and retired in 1989. In 1990 he accepted a civilian position at the NATO Communication and Information Systems Agency located in Brussels, Belgium where he served in the engineering directorate managing NATO Maritime Communications Systems projects. In 1996 he returned to the United States and moved to Hampton, and in 1999 moved to North Hampton where he and his wife renovated their 100 year old home. Family members include his wife Lisa Belanger of North Hampton, his brother Albert Belanger of Brentwood, his sister Doris Pearson of Billerica, MA and several nieces and nephews. A Mass of Christian Burial will be celebrated at 10:30 AM on Thursday, July 11, 2019 at the St. Theresa Catholic Church, 815 Central Rd., Rye Beach, NH. Burial will be at 1 PM in the NH State Veterans Cemetery, Boscawen. If desired donations may be made to a charity of one's choice.

The family of CDR Raymond L. Belanger created this Life Tributes page to make it easy to share your memories.

Send flowers to the Belanger family.