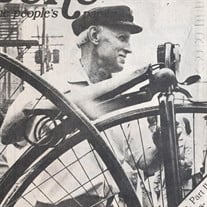 Portsmouth – Raymond Clement Cormier, 99, of Portsmouth, died at his home, surrounded by his family, on Wednesday, June 22, 2016. He was born in Manchester on January 30, 1917, the son of the late Napoleon and Beatrice (Frechette) Cormier and the oldest of four children. Raymond served in the US Army as a 1st SGT in the artillery and participated in battles and campaigns throughout Northern Europe including, Normandy, France, the Rhineland and Ardennes. He met his wife of 66 years, the late Rachel (Binette) Cormier, while on leave from active duty. He retired from the Portsmouth Naval Shipyard after 33 years as a Machinist/Inspector and spent his retirement working on his many hobbies and spending summers at his cabin in Maine. He was an avid life-long bicyclist and was a member of the Wheelman Club for many years. Raymond enjoyed his back yard garden, played the piano well into his 90s and in the 1950s, co-founded the NH Astronomy Club. He was also a weight lifter in his youth and ran a gym from his basement. He is survived by his 5 children, Paulette Cormier and her husband Michael Skinner of Everett, WA, Francis Cormier of Gilford, ME, Charles Cormier and his fiancée, Lisa Lane of Portsmouth, Jocelyn Cormier of Portsmouth and David Cormier of Blanchard, ME. He also leaves his 5 grandchildren, Bernadette Cormier, Valerie Boisvert, Andrea Cormier, Kristine Boisvert Trogner and Charles Cormier II. A private memorial will be held at a future date. In lieu of flowers, memorial donations may be made to the Hyder Family Hospice House, 285 County Farm Rd., Dover, NH 03820.

Portsmouth &#8211; Raymond Clement Cormier, 99, of Portsmouth, died at his home, surrounded by his family, on Wednesday, June 22, 2016. He was born in Manchester on January 30, 1917, the son of the late Napoleon and Beatrice (Frechette) Cormier... View Obituary & Service Information

The family of Raymond C. Cormier created this Life Tributes page to make it easy to share your memories.