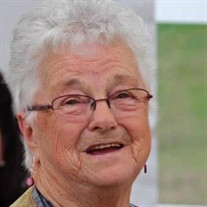 Kensington – Rebecca (Becky) M. Titcomb, 93, of Kensington, passed away peacefully on Saturday, March 19, 2022 at her home with loving family by her side. She was born in Merrimac, MA May 30, 1928, the daughter of the late Ivory and Gladys (Carruthers) Flanders. She attended Hampton Academy and as a young lady worked at the former Hytron Radio electronic in Newburyport, MA, Welpro Shoe in Seabrook and for many years at the Pink Store (Burditt’s) in Hampton Falls. Becky had a feisty personality and a love for people. She was a gardener, Search-a-Word master, square dancer, stock car racer, beloved fan of the New England Patriots and loved crafts of all kinds - sewing, crocheting, and painting. At the age of 80, she discovered a passion for cruising around the Caribbean, even parasailing for the first time at the age of 85. One of her biggest passions in life were horses. She was a long time member of the United States Trotting Association and enjoyed driving and breeding standardbred race horses for several years alongside her husband Harlan at Fieldstone Farm in Hampton Falls, NH. Her love of horses continued when her daughters got involved with Morgan Horses. Becky was a long time supporter of the New England Morgan Horse Association and The American Morgan Horse Association. She went on to breed many regional and national champion Morgan horses. Becky’s involvement with her hobbies left her with a large extended network of friends who became part of her family. She was the loving wife of the late Harlan F. Titcomb who predeceased her in 1986. She leaves six children, Harlan Titcomb, Jr. and wife Margaretta of Palm Coast, FL, Brenda Roy and husband Bob of Seabrook, Ivy Burditt and husband David of Hampton Falls, Dutch Felch and husband Chet with whom she made her home with in Kensington, Kathy Campbell and husband Bryan of Seabrook, daughter in law, Diana Tuttle of Seabrook and son in law Rick Riley of Hampton Falls. Also surviving are numerous grandchildren, great grandchildren and great great grandchildren, nieces and nephews. She was predeceased by daughters, Claudia Abrams and Virginia Riley, son Gary Tuttle, her sister Mona Gleason, her brother Herbert Flanders, and grandson James Tuttle. Visiting hours will be from 5-8 P.M Thursday, March 24, 2022 in the Remick & Gendron Funeral Home-Crematory, 811 Lafayette Road, Hampton. Services will be held at 11 A.M. Friday, March 25, 2022in the Hampton Falls Baptist Church, 3 Lincoln Avenue, Hampton Falls. Burial will follow in the High Street Cemetery, Hampton. Flowers can be sent to Remick & Gendron Funeral Home or if desired, donations may be made to support the youth programs of New England Morgan Horse Association, C/O Judy Candage, 70 Nemco Way, Ayer, MA 01432.

Kensington &#8211; Rebecca (Becky) M. Titcomb, 93, of Kensington, passed away peacefully on Saturday, March 19, 2022 at her home with loving family by her side. She was born in Merrimac, MA May 30, 1928, the daughter of the late Ivory and Gladys... View Obituary & Service Information

The family of Rebecca M. Titcomb created this Life Tributes page to make it easy to share your memories.

Send flowers to the Titcomb family.