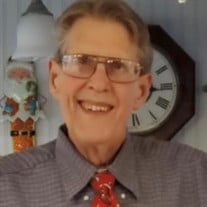 York Beach, ME &#8211; The Rev. C. Edward Claus, 83, of York Beach and longtime Methodist clergyman, died Thursday, December 23, 2021 at York Hospital after a period of failing health with his loving family by his side. He was born in Lawrence,... View Obituary & Service Information

The family of Rev. C. Edward Claus created this Life Tributes page to make it easy to share your memories.