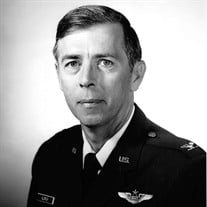 Hampton Falls – Colonel Richard B. Aldrich, (USAF, Ret.), 83, of Hampton Falls, passed away peacefully on Wednesday, July 10, 2019 at his home with devoted and loving family at his side. He was born in Lowell, MA on July 22, 1935, the second son of the late Nathan and Dorothy (Marchacos) Aldrich and was the husband of the late Marietta (Keefe) Aldrich. Colonel Aldrich was raised in Tewksbury, MA and graduated from Tewksbury High School in 1952. He holds a bachelor's degree in textile manufacturing from Lowell Technological Institute, Lowell, MA; a bachelor's degree in electrical engineering from the University of New Hampshire in Durham; and a master's degree in logistics management from the Air Force Institute of Technology, Wright-Patterson Air Force Base, OH. He was commissioned through the Air Force ROTC program at Lowell Technological Institute in June 1956 and attended navigator training at Ellington Air Force Base, Texas. From September 1957 to March 1958, he was trained as an electronic warfare officer at Keesler Air Force Base, MS, and, from April to May 1958, attended Aircrew Survival School, Stead Air Force Base, NV. In June 1958, Colonel Aldrich was assigned as chief analyst at the European Electronic Intelligence Center, Lindsey Air Station, Wiesbaden, West Germany. From June 1962 until August 1964, he attended the University of New Hampshire. Following graduation, he was assigned to Headquarters, Air Force Logistics Command, Wright-Patterson Air Force Base, Ohio, as an electronic warfare project manager. Continuing his assignment with AFLC, Colonel Aldrich served as flight test navigator, electronic warfare officer, and electrical engineer at Lockheed Aircraft Services Company, Ontario, CA, from June 1967 to November 1969. Returning to Wright-Patterson, Colonel Aldrich served as chief of the Electronic Warfare Branch at AFLC until December 1972, when he was assigned to Aeronautical Systems Division. He was assistant chief of the ASD Blue Team from December 1972 until June 1974, when he was named chief of ASD's Electronic Warfare Plans Division. Colonel Aldrich went to the Electronic Systems Division, Hanscom Air Force Base, MA, in July 1975 as director for business management for the E-4 Advanced Airborne Command Post. Continuing with the E-4 program, he was named AFLC's deputy program manager for logistics in August 1977. From June 1978 to July 1979, while still stationed at Hanscom Air Force Base, Colonel Aldrich served with the Air Force Acquisition Logistics Division as director of electronic logistics. Assigned to Brunssum, The Netherlands, Colonel Aldrich was director of systems engineering for the North Atlantic Treaty Organization's E-3A Airborne Warning and Control System program from August 1979 until August 1981. He then assumed the duties as Deputy for Acquisition Plans and Analysis at Wright-Patterson AFB and retired in 1984. Colonel Aldrich is a senior navigator with over 2800 hours of flying time. His military awards and decorations include the Legion of Merit, Meritorious Service Medal with one oak leaf cluster, the Air Force Commendation Medal with one oak leaf cluster, the Air Force Organizational Excellence Award, and the Air Force Outstanding Unit Award. Family members include his children, Kim R. DeMaso of Merrimack, NH, Colleen P. Kruchem of Reston, VA, and Richard M. Aldrich of Hampton Falls, NH and his wife, Liza Aldrich. In addition, he leaves behind four grandchildren, Christina DeMaso, Michael DeMaso, Samuel Aldrich, and Alexandra Aldrich. His surviving siblings include Donald Aldrich, Kenneth Aldrich, N. Gary Aldrich, Susan (Aldrich) Connor, and Joanne Aldrich. Visiting hours will be from 11 AM to 1 PM on Saturday, July 13, 2019 in the Remick & Gendron Funeral Home-Crematory, 811 Lafayette Rd., Hampton. A time for sharing memories will follow the visitation starting at 1 PM in the funeral home. Burial will be in the West View Cemetery, Hampton Falls. In lieu of traditional remembrances, donations may be made to the American Cancer Society?

The family of COL Richard B. Aldrich created this Life Tributes page to make it easy to share your memories.

Send flowers to the Aldrich family.