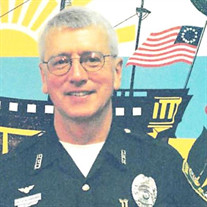 Hampton – Richard W. “Dick” Bateman, 72, of Hampton, died Thursday, November 26, 2020 at Oceanside Skilled Nursing and Rehabilitation. He was born February 10, 1948 in Lawrence, MA a son of the late Joseph and Gertrude (Macdonald) Bateman, Sr. Dick graduated from Lawrence High School in 1965 where he excelled in track. He received a Bachelor of Science degree from Salem State College in 1970 and a Masters of Education degree from Cambridge College in 1995. He taught school at Spofford Pond Elementary School in Boxford, MA for 38 years, retiring in 2007. Dick was a part time police officer with the Hampton Police Department motorcycle division from 1971 to 2012. Amongst many things Dick was a selectman for the Town of Hampton, advisor to the Town Cable Committee, member of the Town of Hampton Planning Board and Cemetery Committee. He was a co-founder of the New Hampshire Congressional Law Enforcement Awards, Ambassador for the National Law Enforcement Officers Memorial that was part of the Rockingham County Law Enforcement Officers Association and involved in Police Emerald Societies. He leaves behind his son Shane Bateman and his wife Jessica of Hampton Falls, his daughter Kelly-Ann Olson and her husband Jeff of Greenland, three grandchildren Owen and Avah Bateman, Evy Olson, three brothers, Joseph of Topsfield, MA, Jack of North Hampton, Robert of Oswego, NY, nieces and nephews. In addition to his parents he was predeceased by his sister Harriet Fremont-Smith. Visiting hours will be held from 2-4 and 5-7 PM Friday, December 4, 2020 at the Remick & Gendron Funeral Home-Crematory, 811 Lafayette Road, Hampton. A mass of Christian burial will be celebrated at 11 A.M. Saturday, December 5, 2020 at St. Elizabeth Church, RT 1A Seabrook Beach. Relatives and friends are respectfully invited. In lieu of traditional remembrances donations may be made to Rockingham County Law Enforcement Officers Association PO Box 361, Hampton, NH 03843. CDC rules will be followed.

The family of Richard W. Bateman created this Life Tributes page to make it easy to share your memories.

Send flowers to the Bateman family.