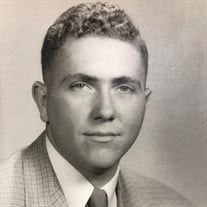 Portsmouth - Richard Theodore Bettcher of North Hampton passed away on Tuesday, November 24, 2020, weeks shy of his 85th Birthday, with his loving family by his side. “Rich” attended local schools and graduated from Portsmouth High School class of 1954 after which he attended the University of New Hampshire. In 1958 he went to work for his father Ted at New Hampshire Provision Co., the family business. Richard worked loading trucks full of hams, hot dogs and meats for the Berlin and Keene warehouses. Eventually, he and his cousin Carl Shultz, Jr., signed up for the submarine reserves, and at the same time he began his career with Local 6 Boston Insulated Engineers & Pipe coverers. His job took him across New England for 37 years servicing papermills and power plants. In addition, he loved to lobster fish which he did off and on over a 60-year span. His love of lobster fishing began during the summers he spent at the family’s summer home on Wallis Sands Beach, Rye. He took his catch of the day door-to-door to sell to neighbors and friends for a staggering thirty-five cents a pound. Richard’s first travel adventure was at age 15, when, alongside his father, he traveled to the Miramichi River in Canada to salmon fish. His father Ted taught all his sons Kenneth, Robert and Richard to hunt and fish and truly enjoy the beauty of the outdoors. Richard instilled the same love for outdoor hunting and fishing in his son Kurt and grandson Alex. In 1995 Richard retired and began to travel the world seeing such places as Alaska, Europe, Iceland, and Antarctica. In 1997 he became a facilitator for the bereavement group Seacoast Widowed Persons which he completed 5 years later. In fact, when his niece Amy was ill, Richard was a frequent visitor and nurturer. His visits were spontaneous and loving. When Richard came to see her in Hospice, she remarked, “Uncle Rich, you look tired. Somebody get him a chair!” Richard was predeceased by his parents Theodore and Edna (Peschel) Bettcher, his second wife Leslie (Dolan) Bettcher, his niece Amy Bettcher and his granddaughter Michelle Bettcher. Survivors include children Colleen Cullen of Dover, Thomas Bettcher and wife Brenda of Portsmouth, Greta St.Germain and husband Steven of Rye, Kurt Bettcher and wife Debra of North Hampton, and stepsons Michael Houghton of Exeter, and Andrew Houghton of Dorchester. Grandchildren include Tanya, Kimberly, Melissa, Mark, Nicole and Alex. He had many great grandchildren and even a great-great grandchild. Richard’s siblings include Robert Bettcher and wife Barbara of Raymond, and Kenneth Bettcher and wife Lynda of Portsmouth. Richard’s first wife Joan Bettcher of Hampton was a strong supporter and life-long friend to Rich. A Celebration of Richard’s Life is planned for December 9, 2020, from 3 to 7 PM, at Abenaqui Country Club, 371 Central Road, Rye. NH. Family and friends invited. In lieu of flowers the family is asking that you consider honoring Richard’s memory through a donation to support Rockingham VNA Hospice, 137 Epping Road, Exeter, NH, 03833. They provided compassionate care in Richard’s final days.

Portsmouth - Richard Theodore Bettcher of North Hampton passed away on Tuesday, November 24, 2020, weeks shy of his 85th Birthday, with his loving family by his side. &#8220;Rich&#8221; attended local schools and graduated from Portsmouth High... View Obituary & Service Information

The family of Richard T. Bettcher created this Life Tributes page to make it easy to share your memories.

Send flowers to the Bettcher family.