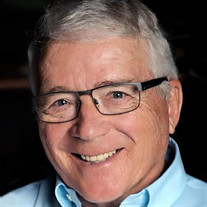 Exeter – Richard Leroy Buckingham, 74, of Exeter, and a former longtime resident of Hampton Falls, passed away peacefully on Wednesday, January 8, 2020, at the Hyder Hospice House in Dover after an extended period of declining health. He was surrounded by his loving and devoted family. Richard was born on September 27, 1945, in Wabash, IN, the son of the late Ralph and Luella (Sell) Buckingham. He shared over 52 years of marriage with his wife, Cheryl (Robins) Buckingham. Raised in North Manchester, IN, Richard graduated from Manchester High School with the Class of 1963 and earned his Bachelor’s Degrees in Economics and Psychology from Wabash College in Crawfordsville, IN. Shortly after graduation in 1967, he married Cheryl, his high school sweetheart, and they moved to Cambridge, MA, where Richard pursued his Master’s Degree at Harvard Business School. He left school to serve his country as a commissioned officer with the United States Navy and upon his discharge returned to Harvard to complete his studies. After completing his post graduate degree, Richard and Cheryl moved to Minneapolis for a few years, ultimately settling in Hampton Falls, NH, in 1978 where they raised their family. Richard spent his career in finance working for several companies. In his semi-retirement years, he worked as a financial consultant. While in Hampton Falls, he and Cheryl were active parishioners of the Hampton United Methodist Church. Richard will be fondly remembered as an adoring husband, father, grandfather, and friend. He was an avid reader who loved playing golf, watching collegiate sports, traveling, and most importantly spending time with his family. Surviving family members include his wife and best friend, Cheryl Buckingham of Exeter, his son, Blake Buckingham and his wife, Amy, of Brookeville, MD, his daughter, Amber Buckingham of Stratham and his loving grandchildren, Drew Buckingham and his wife Sarah, Trevor, Carter and Cooper Buckingham and Garrett and Nick Frattali. In addition to his parents, Richard was predeceased by his sisters, Beverly Frieden and Janet Buckingham. Visitation will be held from 1 to 2:30 PM on Sunday, January 12, 2020, in the Remick & Gendron Funeral Home - Crematory, 811 Lafayette Road, Hampton. Services will immediately follow at 2:30 PM in the funeral home. Burial will be at a later date. In lieu of flowers, the family suggests donations to Little Angels Service Dogs

Exeter &#8211; Richard Leroy Buckingham, 74, of Exeter, and a former longtime resident of Hampton Falls, passed away peacefully on Wednesday, January 8, 2020, at the Hyder Hospice House in Dover after an extended period of declining health.... View Obituary & Service Information

The family of Richard L. Buckingham created this Life Tributes page to make it easy to share your memories.

Exeter – Richard Leroy Buckingham, 74, of Exeter, and a former...