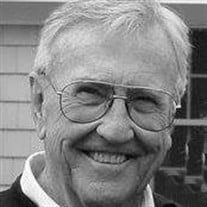 Hampton - Richard T. Chaisson, 88, passed away peacefully at his home in Hampton on July 26, 2016. Dick (or D) was born in Yarmouth, ME, May 19, 1928, the son of Daniel and Levinia Chaisson and attended Yarmouth schools. In 1944, with five siblings serving in the military during WWII, he wanted to join them in the war effort. Too young to join the US Marines Corp, he joined the Merchant Marines and served two years. He later enrolled at Portland Junior College but enlisted in the USMC during the Korean conflict. He proudly served in the USMC for six years, as a Staff Sargent. After leaving the military he settled in Portsmouth, a city he loved, and continued his education at UNH. He also was known to do a bit of tailgating at UNH during his lifetime! On September 4, 1954 he married Patrice Gonyer and last summer they celebrated 61 years of marriage by renewing their vows surrounded by their family at Lake Winnipesaukee. In addition to his beloved wife Patti, Dick is survived by his five children: Suzanne Griffiths and her husband Griffe of Woodacre, CA, Daniel and his wife Sandra (Tucker) of Kensington, Peter and his wife Martha (Cannon) of High Point, NC, Anne Baribeault and her husband Jim of Newburyport, MA, and Michelle Flynn and her husband Joe of Portsmouth, nine grandchildren: Jacqueline, Lauren, Samantha, John, Daniel, Emma, Jack, Zoe and John, plus many nieces and nephews. Along with his wife’s singing, he most loved spending time with his children and grandchildren. They all insist they were his favorite, whether in-laws or outlaws! Dick worked in the construction business for most of his life, first as a successful sales rep and later as owner of Twin State Concrete Co. in West Lebanon, NH. He was active in the community: elected to three terms on the Portsmouth City Council, served one term in the New Hampshire State Legislature, served on the school Board of St. Patrick’s School in Portsmouth, NH, which all his children attended, and was a Trustee of the Portsmouth Public Library. He was a Past President of New Hampshire Good Roads, Director of Associated General Contractors, and belonged to many industry organizations. He belonged to the Knights of Columbus #140, the Elks Lodge #97, and the VFW Post 168, all of Portsmouth, and was a member of Portsmouth Country Club, Keene (NH) Country Club and Hooper (Walpole, NH) Country Club. Dick was a master storyteller and had a wicked sense of humor. He was famous for finding a connection with everyone he met and loved nothing better than to have a Manhattan (or two since you can’t fly on one wing) and engage in conversation. He loved his family, his God, his country, and the USMC. He had a strong faith and at the time of his death was a communicant of Our Lady of Miraculous Medal in Hampton where he served as a lector for many years. He was predeceased by his mother and father, six brothers and three sisters. Visiting hours will be from 5 to 7 P.M. Friday, July 29, 2016 at the Remick & Gendron Funeral Home-Crematory, 811 Lafayette Road, Hampton. A mass of Christian burial will be celebrated at 9:30 A.M. Saturday, July 30, 2016 at Our Lady of Miraculous Medal Church, Hampton. Burial will follow in the Calvary Cemetery, Portsmouth. In lieu of flowers, donations may be made to Our Lady of Miraculous Medal Parish, 289 Lafayette Road, Hampton, NH 03842 or Rockingham VNA & Hospice, Community Relations: Attn: Vivian Brown, Exeter Hospital, 6 Alumni Drive, Exeter, NH 03833 or go to www.exeterhospital.com.

The family of Richard "Dick" Chaisson created this Life Tributes page to make it easy to share your memories.