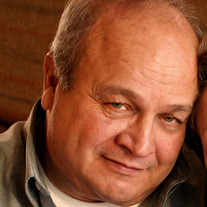 HAMPTON - Richard Marsten Correll shared his warm and vibrant love with his cherished family and dear friends and neighbors, from January 8, 1945 to July 12, 2017. “Richy” spent his childhood in Meriden, CT, where he played football, developed a passion for art and design, and was a budding entrepreneur, peddling Good Humor ice cream and newspapers. In high school, he met the love of his life and wife of 51 years, Joanie Carroll. Rich attended Wentworth Institute of Technology and continued his education at the University of Maryland, Europe while stationed in England serving in the Air Force. He also did stints in Maine and at Pease AFB in Portsmouth. Following his military service, Rich graduated from Syracuse University with a Bachelor of Architecture degree. Rich and Joan’s love for the NH Seacoast brought them back to the area in 1979, where he designed, and together with relatives and friends, built a home for his family in Hampton. In 1984, Rich hung out his own shingle and his diverse architectural imprint can be seen throughout the region. He developed a reputation for sensitivity to client needs, often saying, “I’m only a tool in your hands.” His favorite project was the 1987 award-winning renovation of the historic train depot, which housed his firm, Correll Associates, Architects. Rich was a member Emeritus of the NH Chapter of the American Institute of Architects. In addition to being the rock and heart of his family and growing his business, Rich supported the Seacoast community in many ways, including serving on the Executive Board of the Hampton Beach Area Chamber of Commerce. He was also a Past President of the Rotary Club of Hampton and was particularly known for leading the initial fundraising to create the WHS Scholarship Fund. Rich was predeceased by his mother and father, Carmel Romano Correll and Walter Marsten Correll. He is deeply missed and survived by his wife, Joan Carroll Correll, of Hampton, NH; daughter, Juliet Correll Wright, son-in-law, Brad Wright, and grandchildren, Willow and Marsten Wright, of Andover, MA; son, Sean Correll, granddaughter, Rosie Correll, and Sean’s family, Misty Flores and her children, Paxton, Aydon, and Talan, of Exeter, NH; sister, Mariene Correll of Manchester, CT; and brother Rusty Correll, of Tagatay City in the Philippines; and many treasured relatives. A gathering to remember Rich will be held from 4:30pm to 7:30pm on Monday July 17, 2017, with memories shared at 6:00pm, at the train depot that he lovingly restored at 208 Atlantic Avenue, North Hampton, NH. Friends and family are invited to join. In lieu of flowers, contributions in Rich’s name may be made to The Rotary Foundation and mailed to the Rotary Club of Hampton, P.O. Box 353, Hampton, NH, 03843.

HAMPTON - Richard Marsten Correll shared his warm and vibrant love with his cherished family and dear friends and neighbors, from January 8, 1945 to July 12, 2017. &#8220;Richy&#8221; spent his childhood in Meriden, CT, where he played football,... View Obituary & Service Information

The family of Richard Marsten Correll created this Life Tributes page to make it easy to share your memories.