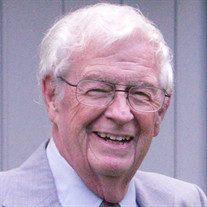 Hampton - Richard C. Gavette, 87, of Hampton, and Venice, FL, passed away peacefully after a sudden illness on Friday April 7th, 2018 at Venice Bayfront Health Hospital, Venice, FL. Richard was born in Bristol, CT on November 14th, 1930 and was the oldest of three children of the late Thelma Treado Servent and Carleton Gavette. He was raised in Bristol, however, he graduated from Wilcox Technical High School in Meriden. Richard was a talented silver designer and architect, he worked for several of the major guild companies such as Gorham, Towle, Ben Forman & Sons and Fortunoff’s. He was a real estate investor and utilized his architect skills to design several homes and apartment buildings. His passion for art was expressed through his beautiful floral arrangements. His hobbies included his beloved Scottish terriers, collecting antique cars, boating and traveling. Richard loved Walt Disney’s vision. He spent the majority of his lifetime, admiring the Walt Disney Company’s artwork, and movies, as well as vacationing in the theme parks. He extended his passion for Disney to all his family members. Richard leaves his beloved wife of 53 years, Beverly A. Gavette, of Hampton, his loving daughter, Nancy Gavette Scanlon of Vernon, CT, Nancy’s former husband Charles M. Scanlon of Newington, CT; his son Todd C. Gavette of Hampton, two granddaughters, Stephanie Scanlon and her husband, Robert, of Bristol, CT and Kristin Scanlon of Newington, CT; three great grandchildren, Kyle, Samantha, and Joseph; a sister, Barbara Hentz, of Bristol, CT; several nieces and nephews. He was predeceased by his sister Beverly R. Gavette. Family and friends may call from 10-11am Saturday April, 21st 2018 at the Remick & Gendron Funeral Home-Crematory, 811 Lafayette Road, Hampton. Services will be immediately follow at 11 A.M. in the funeral home. Burial will be in the Center Cemetery, North Hampton. In lieu of flowers, memorial donations may be made to the Scottish Terrier Rescue of Florida http://www.scottierescueflorida.org.

The family of Richard C. Gavette created this Life Tributes page to make it easy to share your memories.

Send flowers to the Gavette family.