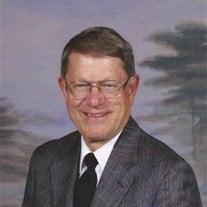 Harpswell, ME - Dr. Richard C. Hamilton, 84, of Harpswell, died Thursday, January 26, 2017 at Maine Medical Center in Portland following a brief illness. He was born in Boston, Mass., February 8, 1932, a son of the late Harry and Mary (Calhoun) Hamilton. He was a graduate of Spaulding High School in Rochester, NH with the Class of 1950, Boston University in 1955, and also received his Master’s degree in 1960 and Doctorate in 1975 from Boston University. He was a veteran of the US Army serving in the Republic of Korea as a Platoon Leader and Company Commander in the 17th Infantry of the 7th Division. Dr. Hamilton’s career in education included serving as superintendent of schools in Norwell, Mass. for 5 years, Hampton, NH for 12 years and Rochester, NH for 4 years. He served as principal in Orford, NH for 3 years, assistant principal at Cony High School in Augusta, ME for 8 years and as a teacher in Tilton, NH for 2 years and in Rockland, Mass. for 3 years. He was a member of the Massachusetts and New Hampshire Superintendents Associations, served many years in the New Hampshire Interscholastic Athletic Association and was a member of the Maine Principals Association. He was also a member of the Ancient Order of Free and Accepted Masons and the Veterans of Foreign Wars. He shared 64 years of marriage with his wife, Jean C. (Paige) Hamilton. In addition to his wife, family members include two sons, David Hamilton and his wife Pamela of Dover, NH, Dale Hamilton and his wife Diane of Brunswick, ME, his daughter, Leslie Currier and her husband Gary of Brunswick, ME, seven grandchildren, Megan and Justin Hamilton, Kelly Daynard, Michael Currier, Anna and Alicia Davis, Jackson Fredericks, three brothers, Lawrence Hamilton of Virginia Beach, VA, John Hamilton of Montgomery, AL, David Hamilton of Hopkinton, NH, and many nieces, nephews and cousins. He was predeceased by his son, Michael Hamilton in 1974 and by his two sisters, Elizabeth Johnson and Jeanne Werkema. Private services will be held at the convenience of the family. If desired, donations may be made to the JDRF Juvenile Diabetes Foundation, 26 Broadway, 14th Floor, New York, NY 10004 or www.jdrf.com. Arrangements are by the Remick & Gendron Funeral Home-Crematory, Hampton, NH.

The family of Richard C. Hamilton created this Life Tributes page to make it easy to share your memories.