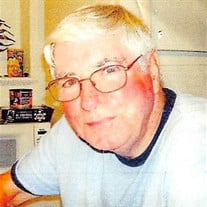 Seabrook – Richard L. “Dick” MacLean, 79, of Seabrook and a former longtime resident of Salisbury, MA, passed away peacefully on Friday, February 16, 2018 after a long illness. He was born in Chetticamp, Nova Scotia on May 3, 1938, a son of the late Angus Chisholm and Gertrude MacLean. Dick came to the United States in 1954, grew up in Newburyport and was a 1956 graduate of Newburyport High. He met the love of his life Judith (Collins) MacLean in 1957 and they were married in 1961. Dick and Judith settled in Salisbury to raise their family where Dick worked as an auto mechanic at Simmie’s Garage. They purchased the business in 1983 and retired in 2000. Dick and Judith were snowbirds and shared their time between Barefoot Bay, FL and Seabrook. He served the Salisbury community as an on-call firefighter for over 27 years, was a member of the Newburyport Masons and was a veteran of the National Guard. Dick was also a fine musician and was known for his fiddle playing of many Scottish folk songs. In addition to Judith, his wife of over 57 years, Dick leaves his daughter, Tammy Saracy and her husband Stanley of Seabrook and his grandchildren, Richard Saracy and his wife Bacall and Ashley Saracy, all of Seabrook. He also leaves his step-siblings, Robert Sardinski and Suzanne Sardinski, both of Ontario, Canada. He will also be missed by his best buddy, his Shih-Tzu, Gus. He was predeceased by his parents and step-brother, Alec Urguhart. Services will be private. If desired, memorial donations may be made to the Alzheimer’s Association, 480 Pleasant St., Watertown, MA 02472 or online at alzspirit.org. The family would like to thank the staff at the Oceanside Nursing Home for their love and compassion during this difficult time.

The family of Richard L. MacLean created this Life Tributes page to make it easy to share your memories.

Send flowers to the MacLean family.