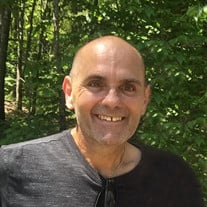 Conway, NH – Richard A. Martin (also known as Dad, Uncle Ricky, Papa, and Rick), was welcomed into heaven by his daughter Desiree on July 1, 2019. He was predeceased by the two strong women who raised him- his mother, Theresa Perry, and his grandmother, Irene Silva. He was survived by his children Alisha, Anjelica, Richie, and Michelle, his grandsons Caleb and Jackson, sister Donna, nieces and nephews Cheri, Samantha, Al, Andy and Hera, loving pets Lizzy, Bruschi, Molly, George, and Bling Bling, and many more cousins and friends. In every situation, Rick managed to collect friends and memories wherever he went. Rick deeply admired nature and the outdoors and spent as much time as possible being surrounded by it, in any capacity. His passion stemmed from his youth, where he and a group of friends would often hitchhike from Cambridge, MA to the Kancamangus Highway in Conway, NH to backpack and camp in the White Mountain National Forest. Though he no longer hitchhiked, his love for camping, bonfires, and long nature walks never faded. As he grew older, he got his nature fix by spending several hours a day filling up his many bird feeders and sitting on the back deck, watching them be enjoyed. In the winter time, he loved to take long car rides in blizzards to watch the trees pile up with snow, and in thunderstorms, he loved to sit in the screened in porch to watch and listen in complete fascination. Rick had a childlike wonder. He was amazed by small things, some that many of us look past in our day to day lives. Hanging strawberry plants, smooth sea glass washed ashore, fallen bird feathers, and Hostess cherry pies were a few things that could always bring a smile to his face. Born and raised in Cambridge, MA, Rick was also a very passionate, diehard Boston Red Sox and Patriots fan. The only time he ever raised his voice out of frustration, was when either a close Red Sox or Patriots game was on the tv (or when squirrels were trying to steal bird seed out of the feeders). Most important of all, Rick was a peaceful warrior. During the final months of his life, he was diagnosed with metastatic cancer. The thought of these evil, mutated cells taking over his body scared his family and friends down to the core. Throughout the many appointments, medications, and panicked phone calls, Rick stayed strong, like a hearty oak tree. He began every day with a positive outlook, always telling them to send out “positive vibes.” And that was just the kind of man Rick was – always focused on making the best of the day you were given, never about tomorrow. In lieu of flowers, the family asks you to consider rescuing your next pet from a shelter, donating to a cancer research organization, hanging up a bird feeder, or planning a camping trip with your family.

Conway, NH &#8211; Richard A. Martin (also known as Dad, Uncle Ricky, Papa, and Rick), was welcomed into heaven by his daughter Desiree on July 1, 2019. He was predeceased by the two strong women who raised him- his mother, Theresa Perry, and... View Obituary & Service Information

The family of Richard A. Martin created this Life Tributes page to make it easy to share your memories.