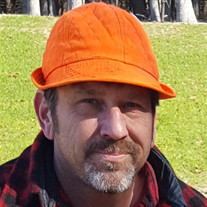 Seabrook – Richard C. “Rick” Merrill, 52, of Seabrook, died unexpectedly Thursday, May 3, 2018 at Brigham & Women’s Hospital in Boston, MA. He was born in Exeter, July 1, 1965 a son of Shirley (Furbush) Merrill of Seabrook and the late Clifton Merrill. A lifelong resident of Seabrook, Rick graduated from Winnacunnet High School with the Class of 1984. He was employed with the NH Department of Transportation as a highway patrol foreman and had 32 years of service. He enjoyed hunting, fishing and the Boston Bruins. In addition to his mother, he leaves his son, Camron Merrill, his former wife, Dawn, his sister, Alicia Merrill - Eaton, brothers, Herbert and partner Laura Eaton, Alan and his wife Terry, James and his wife Audra, Phillip and his wife Sherry, Dennis and his wife Wanda, David Dow and his wife Kim, his good friend, Annie, nieces, Tabitha, Amy, Samantha and Tara, nephews, Little Herb, Keith, Ryan, David, Jr., Mike, Cody and James Jr., aunts and uncles. In addition to his father, he was predeceased by his brother, Ralph Dow. Richard will be greatly missed and will be remembered for his saying “And I will Always Love You”. Visiting hours will be from 6-8 P.M. Monday, May 7, 2018 at the Remick & Gendron Funeral Home-Crematory, 811 Lafayette Road, Hampton. Services will be held at 11 A.M. Tuesday, May 8, 2018 at the Rand Memorial Church, 134 South Main Street, Seabrook. Burial will follow in the Wildwood Cemetery, Seabrook. Relatives and friends are respectfully invited.

The family of Richard C. Merrill created this Life Tributes page to make it easy to share your memories.