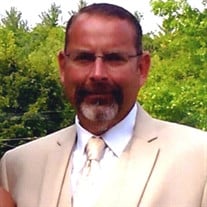 Hampton – Richard W. “ Rick” Moore, 56, of Hampton, passed away at Massachusetts General Hospital on Sunday, October 4, 2020 as a result of injuries sustained in a motorcycle accident. Rick was born on January 17, 1964 to parents, Roland Moore of Plymouth, NH and June (Corson) Bavis of Ashland, NH. He shared over 30 years of marriage with his beloved wife, Fran (Henson) Moore. Rick’s family moved to Ashland when he was a toddler and he went on to graduate from Ashland High with the Class of 1982. Shortly after graduation, Rick enlisted in the United States Navy and served his country honorably as a Missile Technician onboard the nuclear submarine, USS Ulysses S. Grant. Upon his discharge, Rick went to work as an engineering technician with Teledyne D G O’Brien of Portsmouth, a position he has held for the last 30+ years. After a few moves, Rick and Fran bought their home in 1993 and settled in Hampton. Rick was a work-a-holic yet his devotion to family was undeniable. He was known as “Bumpa” to the grandchildren and pool days and baking class with them were some of his happiest times. Rick always put the needs of others before his own. He was truly a one of a kind person that will never be forgotten. He enjoyed hunting and skiing with his friends, Jon Lee and Tom Pike or spending his days at the pool with loved ones, Brian, Jess and Connor Kelly. Rick was also a member of the Ashland American Legion. In addition to Fran, Rick is survived by his sons, Mark Doyle and his wife, Jen, of Plaistow and Jacob Moore of Keene, his grandchildren Cece and Beckett Doyle, his brothers, Craig and wife Hillary of Ashland and Scott and wife Vicki of Plymouth and his sister, Lori Mayo and husband, Dan of Meredith. He also leaves several nieces, nephews and cousins and many good friends. Visiting hours will be from 4 to 6 PM on Friday, October 9, 2020 in the Remick & Gendron Funeral Home – Crematory, 811 Lafayette Road, Hampton. Masks are required and social distancing must be maintained. Services and burial will be private. In lieu of flowers, please consider a donation in his honor to the Wounded Warrior Project P.O. Box 758516, Topeka, Kansas 66675-8516.

The family of Richard W. Moore created this Life Tributes page to make it easy to share your memories.