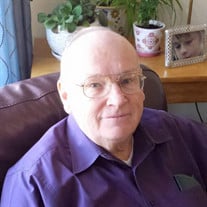 Hampton – Richard J. Norton, 72, of Hampton, died peacefully on Saturday, October 1, 2016 at Exeter Hospital. He was born January 15, 1944 in Everett, MA a son of the late Jason Norton and Agatha (Spinney) Hicks. Raised in Amesbury he graduated from Haverhill Trade School with the Class of 1964. Following graduation Richard enlisted in the United States Navy, where he served 4 years aboard the USS Enterprise. During this time he met his future wife of 47 years and love of his life Judith (Coffey) Norton who predeceased him in 2012. After his time in the service he returned home and worked as a police officer for the town of Salisbury, before starting his career at the former Bailey Corporation as a lead mechanic, retiring after 30 years. Richard enjoyed puzzles and golf, but his greatest joy was driving through Newburyport with his late wife, which became known as “the Tour” to family friends. Family members include his daughter Jill Norton; grandchildren, Jason Grant and Eve Elizabeth; son Craig Hamlin; granddaughter Maddison Hamlin; brother Dana Norton; sister Nan Norton Lowell; his favorite sister in law Jane Sanville and her husband Doug; stepbrother Everett Davis and several step grandchildren, nieces and nephews. In addition to his wife and parents he was predeceased by his brother James Norton; stepdaughter Ann Davis and stepson Scott Davis At Richard’s request all services will be private. Memorial donations may be made in his name to the Merrimack Valley Hospice House, c/o Home Health Foundation, Attn: External Relations, 360 Merrimack Street, Building 9, Lawrence, MA 01843. Arrangements are by the Remick & Gendron Funeral Home-Crematory, Hampton.

Hampton &#8211; Richard J. Norton, 72, of Hampton, died peacefully on Saturday, October 1, 2016 at Exeter Hospital. He was born January 15, 1944 in Everett, MA a son of the late Jason Norton and Agatha (Spinney) Hicks. Raised in Amesbury he... View Obituary & Service Information

The family of Richard J. Norton created this Life Tributes page to make it easy to share your memories.

Send flowers to the Norton family.