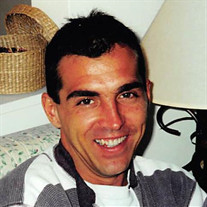 Hampton - Richard William Wiggins, came into this world on February 25, 1968 and moved on October 17, 2019. Here is his story. Richard William Wiggins was a super hero from the beginning. He climbed out of the confines of his crib to adventure up a table then to the top of the refrigerator before he could walk. When he could walk, he explored the outdoors, to cross a busy road giving his mother a fright. As a young boy, his energy knew no bounds and his beauty was breathtaking. All the ladies swooned mistaking Mary’s boy as a girl despite her cutting his shiny hair and dressing him in blue. He was so very sweet and loving. Rich’s mind was quick, mastering the Rubik’s cube at a very young age finishing it in minutes to the amazement of his family. He was quick on the ice too! Excelling in hockey like in anything he put his mind to. Richard attended Winnacunnet High School, took college classes and joined the National Guard. He focused his energy on golf and the odds of numbers. He was a perfectionist in seal coating driveways. Most importantly, Richard loved Imani Grace Wiggins with his whole heart. Although Rich never had a child of his own, Imani was his light. He took her on adventures to the clock tower, the park, the beach to feed the seagulls, Applecrest Farm, Family Dollar, the Home Depot, sledding, soccer and to watch the planes take off and land at the North Hampton Airport and seeing Ryan flying one of them in a lesson. Their adventures grew a bond between niece and uncle — an eternal love of family with lessons in virtue. Rich spent his time with his nephew Ryan with late night DD runs for chai tea and coffee. They grew close discussing the universe and everything in between. Memories with uncle Rich of dropped ice cream cones and the driving range with a lesson from the droppings of a flying seagull bring a smile to his oldest niece, Mandi. Apparently, that is good luck. Samantha remembers running away with a friend at the age of five and that uncle Rich was the one to find her at the five corners playground. Imani says that she loves Uncle Richy so much. So in regards to what makes a successful man, Richard William Wiggins soared. One could say that he flew with the seagulls or reached the highest of mountains. Richard William Wiggins was born to Mary Hattie Hull Wiggins Maher and late Richard Henry Wiggins on February 25,1968 in Newburyport, Massachusetts. His mother, Mary, loves her son deeply and was always there for him. Their mother son bond is the most powerful love that goes deep into the soul. He will be eternally missed and forever loved by the strongest, fearless woman who gave him life. He was raised with three sisters Debra Ann Scheyer, Sandra Lee Tirone who loved watching him play hockey and Catherine Grace Wiggins in the small coastal town of Hampton. He had two nephews and three nieces; Mandi, Samantha, Ryan, Darrius, and Imani, two great nephews; Jacob and Mason. Rich was loved by his aunt Alicia who listened and laughed with him, cousin John who was like a brother, growing up wrestling with each other second cousins to Ally and Sage. His late, loving father, Richard, took him to play hockey and to the mountains on hikes. His late, loving grandparents, Phyllis and Chester Wiggins spent lots of time with him taking him on adventures to the drive in theater, to Kingston Lake every weekend and a trip to Tennessee. He is now with them and his loving Nana, Grace. Richard lived his life with love and compassion knowing the eternal soul has no bounds. Now he is pure eternal energy. A celebration of Richard William Wiggins will be announced soon. In lieu of flowers buy yourself a scratch ticket, think of Rich and good luck. peace...peace...peace

The family of Richard W. Wiggins created this Life Tributes page to make it easy to share your memories.

Hampton - Richard William Wiggins, came into this world on February...

Send flowers to the Wiggins family.