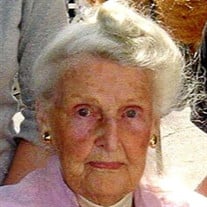 Rye, NH – Rita L. Willitts, 95, of Rye and Boynton Beach, FL, passed away peacefully Tuesday, August 18, 2015 at Trustbridge Hospice, Boynton Beach. Rita was born in Roxbury, MA, October 28, 1919, one of five children of the late Michael J. and Helen F. (McGanty) Boyle. Raised in Roxbury, she graduated from Roxbury Memorial High School and went on to attend and graduate from Massachusetts General Hospital School of Nursing in 1941. Upon graduation, she enlisted in the United States Army Nurse Corps with the 6th General Hospital, serving as a nurse during the Mediterranean, Rome-Arno and Po Valley Campaigns, attaining the rank of 1st Lieutenant. After returning home, she married her former husband, the late William M. Willitts, whom she had met at Ft. Blanding, FL, prior to them both shipping overseas. They raised their family in Andover, Massachusetts, where she volunteered as a school nurse at St. Augustine School for many years. She later was employed as a nurse in the infirmary at Phillips Academy in Andover, MA and later at the University of New Hampshire in Durham after retiring to Rye. Family members include her son William J. Willitts of Delray Beach, FL; daughters, Judith M. Weston of Boynton Beach FL, Helen M. Stulgis of North Hampton, Elizabeth W. Tyrrell of Atlantis, FL; 8 grandchildren; many great grandchildren and several nieces and a nephew. In addition to her parents, she was predeceased by her daughter Marion Willitts; brother Donald E. Boyle and sisters, Marguerite Laughlin, Marie O’Neill and Elizabeth Boyle. A Mass of Christian Burial will be celebrated at 11 AM on Monday, August 24, 2015 in St. Theresa Church, 815 Central Road, Rye Beach. Burial will follow in the Central Cemetery, Rye. Relatives and friends are respectfully invited. In lieu of flowers, please send donations to the Alzheimer's Association, P.O. Box 96011, Washington, DC 20090.

The family of Rita L. Willitts created this Life Tributes page to make it easy to share your memories.

Send flowers to the Willitts family.