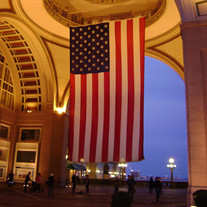 Greenland – Ritchie Buchanan, 92, of Greenland, died Thursday, December 1, 2016 at the Veterans Affairs Boston Healthcare System, West Roxbury, Mass. Campus surrounded by loving family. He was born August 4, 1924 in Lynn, MA the son of the late Richie and Anna (Cummings) Buchanan. He was a veteran of WW II serving with the US Navy. Richie was raised in Boston and graduated from Boston Latin High School and later Lowell Technical Institute. He worked as a sales representative in the industrial supply cleaning field for many years. He was also employed as a union carpenter at the Seabrook Power plant for the 10 year period it was being built. For the past 17 years and up to the time of his death he worked for BMW of Stratham. Mr. Buchanan was a member of the national chapter of the Disabled American Veterans and a member of the Raymond E. Walton American Legion Post 70 of Seabrook. Prior to making his home in Greenland he resided in North Hampton. He shared 29 years of marriage with his wife Joan R. (Maloney) Buchanan. In addition to his wife, family members include five children, Robert (Wendy), Steve (Carla), Bruce (Theresa), Jim (Sue), Scott (Lauri), four stepchildren Kevin Maloney, Dennis Maloney (Kate), Kathleen Lahey (Bill), Timothy Maloney (Jessica), two nieces, a nephew, many grandchildren, great grandchildren and great great grandchildren. He was predeceased by his first wife, Virginia (Dunn) Buchanan, his daughter, Barbara Champagne and stepson, Police Chief Michael Maloney. Visiting hours will be from 4-8 P.M. Sunday, December 4, 2016 at the Remick & Gendron Funeral Home-Crematory, 811 Lafayette Road, Hampton. Services will be held 11 A.M. Monday, December 5, 2016 in the funeral home. Burial will follow in the Center Cemetery, North Hampton. Relatives and friends are respectfully invited. Family flowers only. If desired, donations may be made to the VA New England Healthcare Network, please go to http://www.newengland.va.gov/giving/index.asp

The family of Ritchie Buchanan created this Life Tributes page to make it easy to share your memories.