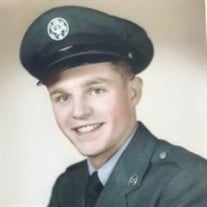 Salem – Robert Edouard Benjamin, 88, of Salem, former resident of Hampton, and prior longtime resident of Georgetown, MA, died peacefully on Saturday, May 2, 2020. Robert (“Bob”) was born and raised in Woonsocket, RI, on December 31, 1931, eighth of eleven children, and youngest son of the late Joseph J. and Laura M. (Henault) Benjamin. He attended Holy Family Grammar School and began his secondary education at Mount St. Charles Academy before transferring for a year to the Seminaries of Missionary Oblates of Mary Immaculate in Bucksport, ME. He returned to Mt. St. Charles to complete high school with the class of 1950. In 1951, Bob enlisted in the United States Air Force, and served five years stateside during the Korean War as a radar specialist. After the war, he transferred to Pease Air Force Base in Portsmouth where he met Jeanne Miville of Manchester at a USO dance. They married in 1954, and celebrated 62 years together, until Jeanne’s passing in 2017. Before leaving the Air Force in 1956, Bob began studies in Engineering at the University of New Hampshire. He then moved to Dorchester, MA to attend the Benjamin Franklin Institute of Technology in Boston, where he received an Associate Degree in Electrical Engineering. He later furthered his education at Northeastern University’s evening college and earned a Bachelor of Science in Electrical Engineering in 1966. In 1959, Bob moved his growing family to Georgetown, MA to begin his career at Western Electric’s Bell Laboratories, where in 1962, he helped develop NASA’s communications satellite Telstar, allowing for the first live broadcast of television images between the US and Europe. Bob rode the wave of phone company diversifications and retired from AT&T Long Lines in 1981. He continued as a consultant into 1984, finally ending his career after 25 years. Bob enjoyed being active for many years. He played on Bell Lab’s bowling, baseball, and soccer teams. Later, he avidly traveled the east coast each summer with camping trailer, cribbage board, and family in tow. Bob was a member of the Georgetown Jaycees, and was active in St. Mary’s Parish, participating in the choir, Men’s Club, as a Eucharistic Minister, and was a past Grand Knight in the Knights of Columbus. In 2012, Bob and Jeanne settled in, with a longawaited move to their much loved Hampton “Beach House”. Bob was predeceased by his wife, Jeanne; his daughter Michelle Sinclair; and his 10 siblings, Edward, Ovila, and George Benjamin, Lillian Ward, Doris Galipeau, Irene Dagasse, Edith Lambert, Lucille Nadeau, Suzanne Sarazin, and Paulette Allen-Duarte. Bob will be missed by his children, Valerie Johnson and her husband Peter of Lexington, MA, Robert Benjamin and his wife Kelly of Windham, NH, and Jacqueline Downing and her husband Michael of Center Barnstead, NH; his grandchildren, Brienne Leary and her husband Sean, Alise Williams and her husband Andrew, Laura Gendreau and her husband Steve, Cory Downing, and Brytni and Alexis Benjamin; his great-grandson, Gavin Leary; and his many cousins, nieces and nephews. The funeral will be private. A memorial service will be held at a later date at the Veteran’s cemetery in Boscawen. In lieu of flowers, memorial donations may be sent to Our Lady of the Miraculous Medal, 289 Lafayette Rd., Hampton, NH 03842. Please revisit tribute page for announcement of memorial service date and time.

The family of Robert E. Benjamin created this Life Tributes page to make it easy to share your memories.

Send flowers to the Benjamin family.