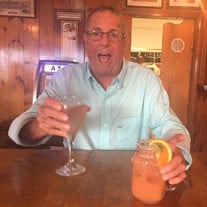 Hampton – Robert C. Bilodeau Jr., 63, of Hampton, died peacefully on Tuesday, October 2, 2018 at Portsmouth Regional Hospital. He was born in Haverhill, MA on September 12, 1955 a son of the late Robert C. and Louise (Magno) Bilodeau. Raised in Reading, MA he graduated from Reading Memorial High School with the Class of 1973. Robert went on to work predominantly in sales, most recently as a real estate agent for RE/MAX in Hampton, a job he considered to be a dream come true. Bob had many interests and was always willing to try something new, from Yoga and Tai chi to spending time at the beach, kayaking and cross country skiing, but his greatest joy was spending time with family and friends. He was a true family man that adored his wife and son more than anything else in the world. Family members include his wife of 33 years, Cathy (Driscoll) Bilodeau of Hampton; son, Josh Bilodeau of Exeter; sister, Judy Guerra and husband Neil of Haverhill, MA; brother in law, Jack Driscoll and wife Nancy of No. Andover, MA, brother in law Paul Doucette and late wife Mary Grace Doucette, and many nieces and nephews that meant the world to him. Not to mention the many friends that he considered as extended family members. In addition to his parents, he was predeceased by his brother in law Frank Driscoll and his wife Linda Driscoll. Visiting hours will be held from 12 to 2 PM on Sunday, October 7, 2018 at the Remick & Gendron Funeral Home-Crematory, 811 Lafayette Road, Hampton. A celebration of life will immediately follow at 2 PM in the funeral home. Relatives and friends are respectfully invited. In lieu of flowers donations may be made to the National Kidney Foundation, c/o Finance Department, 30 East 33rd Street, New York, NY 10016.

The family of Robert C. Bilodeau Jr. created this Life Tributes page to make it easy to share your memories.

Send flowers to the Bilodeau family.