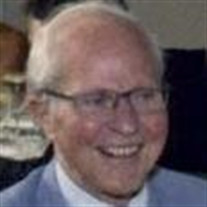 Robert “Bob” Grasty was born November 16, 1925 in Springfield, Kentucky to Reverend John Ellis and Janey Robbins Grasty. He had three siblings: George, Joseph and Betty, all now deceased. The Grasty family moved frequently while Bob was growing up, living in small towns in Kentucky, Mississippi, and Virginia before settling in Bayard in western Nebraska for his high school years. At Bayard High he played football, and was co-captain his senior year. After graduating high school in 1943, he joined the Merchant Marine and was sent to the Sheepshead Bay Service Training Center in Brooklyn before serving at sea during WW II. When the war ended Bob enrolled at the Virginia Polytechnic Institute to study industrial engineering. He graduated in 1950. After college Bob moved to Washington D.C. It was there that, through a connection from his brother George, he met Mary Jane Farnsworth, a graduate of Mount Holyoke and Wellesley College, who at the time was a teacher at the National Cathedral School. They married in 1952 and remained so until Mary Jane’s passing in 2015. Bob and Mary Jane relocated to Cincinnati, Ohio in 1953 for Bob to take an entry-level position at the General Electric jet engine plant in Evendale. Bob and Mary Jane’s children Tom, Peter and Sheila were all born in Cincinnati. Bob worked for General Electric for the next 25 years. While with GE he later worked in Erie, Pennsylvania and Lynn, Massachusetts before becoming a plant manager in Everett, Massachusetts. In 1978 he left General Electric to become vice president of Hitchiner Manufacturing in Milford, New Hampshire. He lived in New Hampshire for the remainder of his life. Bob and Mary Jane spent many happy years in their welcoming home in rural New Ipswich. Bob enjoyed spending time with his grandchildren, working in his garden, chopping wood for long winters, playing golf, barbequing on the deck, listening to the Reds (and later the Red Sox) on the radio, family boat trips down the Ohio, summers on Lake Sunapee, and reading the morning papers at the kitchen table over a pot of coffee and blueberry pancakes. Bob, affectionately known to his family as Bubba, died peacefully on December 14, 2018 at the Edgewood Centre in Portsmouth in the company of loving family and staff after a long struggle with Alzheimer’s disease. Bob will be remembered by family and friends for his kind smile, generous spirit and sense of humor; he is greatly missed. Bob was preceded in death by his wife Mary Jane and son Peter. He is survived by son Tom and wife Sara, daughter Sheila and husband Chris, grandchildren Keith, Jesse and Molly and great-grandchildren Kyle, Alicia, Sydney and Bay. In lieu of flowers, memorial contributions may be sent to the Alzheimers Foundation of America , 322 8th Avenue, 7th Floor, New York, NY 10001.

The family of Robert "Bob" Grasty created this Life Tributes page to make it easy to share your memories.

Send flowers to the Grasty family.