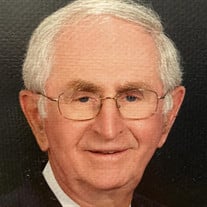 Hampton – Robert (Bob) Ivan Hockenhull Sr., 93, longtime resident of Hampton, died peacefully on Tuesday, February 11, 2020 at Langdon Place of Exeter. Bob was a kind and loving husband, father and grandfather who always put his family first. He was born in Fort Fairfield, ME on April 11, 1926 - son of the late Raymond and Amanda (Wark) Hockenhull. Bob was proud to have been raised on a potato farm in Ft. Fairfield, he graduated from Ft. Fairfield High School and enlisted in the United States Army, serving during WWII and then later recalled to the Korean Conflict. Returning home, he attended the University of Maine in Orono, where he received a Bachelor of Science in Mechanical Engineering. During his time at UMaine, he met and married the love of his life, Natalie (Blackmore) Hockenhull. They were married for 62 years. Natalie predeceased Bob in 2010. After marrying in 1949, they settled in Hampton and Bob began his career at the Portsmouth Naval Shipyard where he worked for 30 years. He retired as Head of the Submarine Engineering Programs Division. One of the highlights of his time at the Shipyard, was the designing of the hydraulic system of the USS Albacore submarine which is now permanently docked in Portsmouth, NH. After retiring from the Shipyard, he worked in Montreal, Canada for 5 years where he was in charge of the Anti-Submarine Warfare Program for the Canadian Government. Bob was a long-time member of the Hampton United Methodist Church where he was involved in the Men’s Club. He was a member of the Portsmouth Country Club, Hampton River Boat Club, NARFE (National Association of Retired Federal Employees) and the Hampton American Legion Post 35. He was an avid skier into his 80’s, who also enjoyed golfing, woodworking, driving along the coast, yardwork and doing various projects with his grandchildren. He is survived by his children, Pamela Hockenhull Ford of Hampton, NH, Robert I Hockenhull Jr. (Janey) of Fort Lauderdale, FL, Deborah Mattos (Jay) of Silver Spring, MD and Cynthia McCahill (Kevin) of Bedford, NH; sister, Joan Douglass of Bangor, ME; grandchildren, Robert Hockenhull III and Amanda (Hockenhull) Lowery, Matthew, Jack and Julia McCahill; great grandson, Gage Hockenhull, and several nieces, nephews and cousins. In addition to his parents and wife, he was predeceased by his siblings, Mae Clement, Erma Lucci and James Hockenhull. Bob will be remembered for his kindness, good nature and willingness to lend a hand. He always had a smile and was loved by all who knew him. He will be dearly missed. Visitation will be from 2 – 4 PM on Sunday, February 16, 2020 in the Remick & Gendron Funeral Home-Crematory, 811 Lafayette Road, Hampton, NH 03842. Services will be held at 11 AM on Monday, February 17, 2020 in the Hampton United Methodist Church, 525 Lafayette Road, Hampton, NH 03842. Burial will follow in the High Street Cemetery, Hampton. Relatives and friends are respectfully invited. In lieu of flowers, donations may be made to the Hampton United Methodist Church.