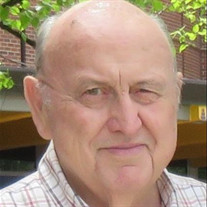 Hampton – Robert M. “Bob” Boyle, 77, of Hampton, passed away Thursday, April 19, 2018 at Massachusetts General Hospital after a brief illness. He was born in Somerville, MA June15, 1940 a son of the late Francis J. and Irene C. (May) Boyle. Bob was raised in Somerville and attended schools there. He was a veteran joining the Air Force right out of high school and served for four years. He was employed as a lineman and later a commercial installer for Verizon for over 30 years. He made his home in Hampton the past 20 years coming from Somerville. He was a volunteer baker and server at United Methodist Church family food programs. He was the husband of the late Pauline (Glynn) Dwyer who predeceased him in 2008. He leaves three stepchildren, Michael Dwyer and his wife Kathleen Mignacca of Hingham, MA, John Dwyer of Salem, MA, Shelley Murphy-Dwyer of Revere, MA, two grandchildren, Conor and Annie Dwyer and dear friends, Brian Bogus, Olive McGreevy, and Tracey Dewhurst. Visiting hours will be from 11 A.M.-1 P.M. Friday, April 27, 2018 at the Remick & Gendron Funeral Home-Crematory, 811 Lafayette Road, Hampton with military honors at 12:45 P.M. A celebration of life get-together will continue from 1:30-4 PM at the Victoria Inn, 430 High Street, Hampton. Friends are respectfully invited. In lieu of flowers donations may be made to the New Hampshire, S.P.C.A.. Box 196, Stratham, NH 03885.

The family of Robert M. Boyle created this Life Tributes page to make it easy to share your memories.

Send flowers to the Boyle family.