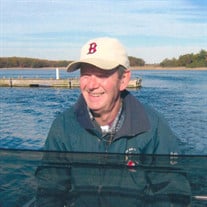 Newbury, MA - Robert Cecil, 79, of Newbury, Plum Island, passed away peacefully at home with his family by his side after a seven-week battle with pancreatic cancer. Bob was born and raised in Newburyport, where his family lineage dates to the first settlers of Newbury. He spoke fondly and often of his Joppa heritage and referred to himself as a ‘Joppyite’. Bob graduated from Newburyport High School and was very proud of breaking records on the track team. After graduating, he joined the Coast Guard Reserves for several years and worked on his apprenticeship with the Portsmouth Naval Base. The Navy Yard is where he remained employed until his retirement. During this time, Bob was an avid boater and loved playing darts on local teams. After retirement, Bob spent the next chapter of his life building and making things such as custom-made fishing rods, his boat, and an actual firing canon. He also enjoyed spending time with his grandsons; fishing, gaming, lighting off fireworks, target shooting, or just talking about all things relating to history or computers. Bob’s second home was the North End Boat Club, where he spent many days on his boat or chatting it up with his friends. Bob was a proud member of the NEBC, Neptune’s, and the International Association of Machinists and Aerospace Workers. Bob is survived by his Daughter Jill (Cecil) Mandragouras and Son-in-Law David Mandragouras of Newbury, Grandsons Alex Mandragouras and Harrison Mandragouras of Newbury, Sister Donna (Cecil) Gerrish and Brother-in-Law Glen Gerrish of Salisbury, Sister Mickey (Kimball) Locke and Brother-in-Law Ron Locke of Seabrook, as well as many beloved nieces and nephews. He is pre-deceased by his Father Howard Kimball and Mother Ann (VanAmburgh/Bradbury) Kimball. My family and I had the privilege of living next door to my dad, Bob, for the past 24 years. He was the type of man that never needed much and never asked for anything…except spending a little time and some good conversation. He lived a simple life and was always the most gracious host to his visitors. Those who love him are left with broken hearts. He will forever live on in our memories. In keeping with Bob’s wishes, a private burial and service will be held. There will be a Celebration of Life in honor of Bob at the NEBC in late spring.

Newbury, MA - Robert Cecil, 79, of Newbury, Plum Island, passed away peacefully at home with his family by his side after a seven-week battle with pancreatic cancer. Bob was born and raised in Newburyport, where his family lineage dates to... View Obituary & Service Information

The family of Robert Cecil created this Life Tributes page to make it easy to share your memories.