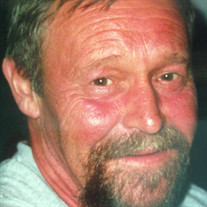 North Hampton, NH – Robert H. “Buka” Goff, 66, of North Hampton, died Saturday, September 12, 2015 at his home surrounded by loving family. He was born September 19, 1948 in Fitchburg, MA a son of the late Sumner Goff and Shirley (Kendall) Murray. Robert was raised in Ashby, MA where he attended Ashby High School. Following graduation he enlisted in the United States Marines. After his time in the Marines he returned home and worked for General Electric in Fitchburg for a number of years, before starting his own painting business. He later worked as a handy man throughout the Seacoast area, most recently spending the last 20 years working as the caretaker for the George Horne Estate in North Hampton up until he retired in 2007. Buka was an avid outdoorsman who especially enjoyed hunting and fishing, but his greatest joy was spending time with family and friends. Family members include his wife Carrie (Burson) Goff of North Hampton; Daughters, Linda Metz and her husband Dean of West Harrison, IN, Michelle Perkins of North Hampton, Shanon Goff and her wife Audrey of Greenland and Mikayla Goff of North Hampton; brothers, Allan Rahkonen, Raymond Goff and Richard Goff; grandchildren, Diana, Brittany, Dean, Samantha, Amber, Kirsten, Brooklyn, Cooper and Oliver; 6 Great grandchildren and many nieces, nephews and cousins. Visitation will be from 2 to 4 PM on Saturday, September 19, 2015 in the Remick & Gendron Funeral Home – Crematory, 811 Lafayette Rd., Hampton. Services will be held at 2 PM on Sunday, September 20, 2015 at the First Congregational Church of Hampton, 127 Winnacunnet Rd, Hampton. Relatives and friends are respectfully invited. Burial will be private. In lieu of flowers, the family requests that donations be made to the First Congregational Church of Hampton.

The family of Robert H. "Buka" Goff created this Life Tributes page to make it easy to share your memories.

Send flowers to the Goff family.