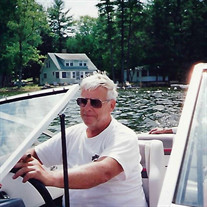 North Hampton - Robert “Bob” Goodsell passed away peacefully on October 12, 2021 with his family by his side. He was born on May 12, 1932, to Robert and Eleanor (Garland) Goodsell of Portsmouth NH and was a stepson to Ralph Swift of Portsmouth NH. Bob graduated from Portsmouth High School in 1950, joined the Navy soon after, and married his high school sweetheart, Nancy (Jenness). They shared 68 years together, living in Rye, on Great East Lake, and in North Hampton NH. Following his time in the service, Bob worked for the Portsmouth Herald for 39 years. He was a tireless worker, taking on several additional part time positions to better provide for his family. Upon retirement from the Herald, Bob continued to work by offering independent contracting services in the area. During his early years, Bob was active in many local activities, such as Rye Auxiliary Firemen, Portsmouth Youth Hockey, and he helped establish Rye Little League. He was also a member of the Rye Congregational Church in Rye Center, where he taught Sunday School and was a counselor of the high school youth group. He was a giving person, who was always willing to help others. Bob and Nancy were members of the Rye Spindrifters Square Dance Club. For many years, they were chaperones for the Portsmouth High School Marching Band and traveled to countless band competitions. They fondly remember the times spent with their close friends, especially “The Turkeys.” He is survived by his wife, Nancy, and three sons, Gary of Washington DC, Mark (Beth) of Stratham NH, and Peter (Laurie) of Exeter NH; six grandchildren, Christopher (Megan), Timothy, David (Amanda), Matthew, Joshua, and Ashley (Reed); two great granddaughters, Ava and Leah; a newborn great grandson; a sister, Beverly Stuart of Exeter NH; as well as many nieces and nephews. There will be no visiting hours or service. It was Bob’s wishes that people celebrate his life with a last toast in his honor. The family invites friends and family to join them in that toast on Sunday, October 17 from 11am-2pm at Mark and Beth’s house in Stratham (27 Birnum Woods Rd). In lieu of flowers, the family asks that you donate to the Friends of the North Hampton Public Library 239 Atlantic Ave, North Hampton, NH, 03862 or a charity of your choice.

North Hampton - Robert &#8220;Bob&#8221; Goodsell passed away peacefully on October 12, 2021 with his family by his side. He was born on May 12, 1932, to Robert and Eleanor (Garland) Goodsell of Portsmouth NH and was a stepson to Ralph Swift... View Obituary & Service Information

The family of Robert C. Goodsell created this Life Tributes page to make it easy to share your memories.