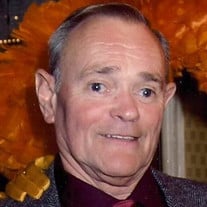 Seabrook – Robert E. “Bob” Kristiansen, 78, of Seabrook, passed away unexpectedly at his home on Tuesday, April 16, 2019. He was born in Malden, MA on October 24, 1940, a son of the late Edmund and Hilda (Hamilton) Kristiansen. Bob had resided in Seabrook since 1962 and was the husband of the late Luceale M. (Eaton) Kristiansen. Bob worked as a floor covering installer for Union Local 2168 in Boston from 1966 until 1999. After his retirement he became an avid kayaker. His favorite times were spent paddling with his family. Family members include one son, Robert E. Kristiansen, Jr. and his wife Cory of Raymond, two daughters: Dawn Malerba and her husband Joseph of Raymond and Robin Eaton and her husband Mark of Seabrook, his brothers: James Coles, Jr. and William Coles both of Newmarket, Richard Coles of Chocowinity, NC, Charles Coles of Amesbury, MA, Michael Coles of Claremont, NH and his sister, Cynthia Hunt of Millis, MA and his four grandchildren Rachel and Caleb Eaton of Seabrook, NH and Robert and Emily Kristiansen of Raymond, NH. In addition to his parents he was predeceased by his sister Evelyn M. Perkins and his brother John R. Kristiansen. Friends may visit from 5 to 6 PM on Monday, April 22, 2019 in the Remick & Gendron Funeral Home-Crematory, 811 Lafayette Road, Hampton. Services will follow the visitation starting at 6 PM in the funeral home. Burial will be private. If desired, memorial donations may be made to the New Hampshire Food Bank .

The family of Robert E. Kristiansen created this Life Tributes page to make it easy to share your memories.

Send flowers to the Kristiansen family.