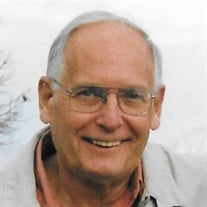 Hampton – Robert W. Medwid, 86, of Hampton, formerly of Rye and Cape Elizabeth, ME died August 9, 2021 in his home surrounded by his family. He was born June 12, 1935 in Norwalk, CT a son of the late Walter and Anna (Boyko) Medwid. Bob was raised in Norwalk and graduated from Norwalk High School before attending Boston University where he earned his degree in Public Relations. He was a veteran serving with the US Army at the Redstone Arsenal in Huntsville, AL. He was a longtime sales executive for the Mobil Oil Company (later Exxon Mobil) retiring after 32 years in 1993. After his retirement, he was elected President and Treasurer while a member of the Board of Directors of the Mobil New England Retirees organization where he served for many years. He leaves two sons, R. Michael Medwid of San Mateo, CA, and Peter Medwid of Darien, CT, their mother JoAnn Baird of Oro Valley, AZ, six grandchildren, and his best friend and dear partner Deborah R. Johnson, of Rye, NH. He also leaves his brother Walter Medwid of Derby, VT and his sister Diane Benedetto of Newtown, CT along with his nieces and nephews. Services will be held at 1 P.M. Tuesday, August 17, 2021 at the Remick & Gendron Funeral Home-Crematory, 811 Lafayette Road, Hampton. Friends may call at the funeral home from 12 P.M. until the hour of the service. Private interment will be in St. John’s Cemetery, Norwalk, CT. In lieu of traditional remembrances, donations may be made to Abilis the non-profit organization that supports Bob’s autistic grandson Matthew.

The family of Robert W. Medwid created this Life Tributes page to make it easy to share your memories.

Send flowers to the Medwid family.