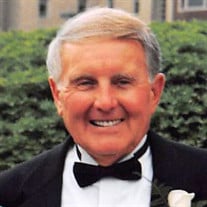 Exeter – Robert F. Mullen, 83, of Exeter and formerly of Lowell, MA, passed away peacefully at his home on Wednesday, June 12, 2019 surrounded by his loving family. Bob was born in Lowell, MA on November 18, 1935, the son of the late Henry F. and Madeline A. (Sullivan) Mullen. Bob shared over 55 years of marriage with the love of his life, Patricia A. (Casey) Mullen. Bob was raised in Lowell and graduated from Keith Academy in 1954. He was recently inducted into the Lowell Catholic School Hall of Fame for performance on the football field. After high school, he proudly served his country with the United States Army. Bob and Pat were married in 1963. They settled in Lowell, then relocated to Westford, MA where they raised their children for the next 26 years. The family vacationed in Seabrook Beach, for many years and purchased their home there in 1978. Bob and Pat spent many wonderful years at Forest Glen Golf and Country Club in Naples, FL and and settled in Exeter in 2013. Bob was an entrepreneur, owning several businesses through the years, many of them with his friend and business partner, the late James Farley of Lowell. He co-owned and operated Agresti’s restaurant in Westford, Massachusetts with his son in law Frank Agresti. At the end of their working years, Bob and Pat worked at the Old Salt Restaurant. In addition to his beloved wife Pat, Bob is survived by his daughter, Kathie Agresti and her husband Frank of Seabrook and his son Shawn Mullen and his wife Lisa of Windham, NH. He also leaves his grandchildren, Christopher and Paige Agresti and Sadie and Conor Mullen and his sister, Rosemary Costello and her husband, Kevin. He is also survived by five very special nieces and nephews and many great nieces and nephews. Bob was known as an extremely friendly and outgoing man. He was known as “the mayor of Seabrook Beach”. Bob was happiest doing anything with his beloved family, but especially enjoying days at the beach, long walks, golfing, and watching whichever Boston Sports team happened to be playing. Bob loved a good cribbage game and a great meal either at home or at a favorite restaurant. Bob was the kind of guy that people enjoyed spending time with because of his enormous generous heart, and kind spirit. Bob was so incredibly proud of all of the accomplishments of his daughter, son and grandkids. He loved attending his grandchildren’s school and sporting events. He was a devoted husband, always by the side of his partner in life, Pat. Calling hours will be from 3 to 8 PM on Monday, June 17, 2019 in the Remick & Gendron Funeral Home – Crematory, 811 Lafayette Rd., Hampton. A Mass of Christian Burial will be celebrated at 10 AM on Tuesday at the St. Elizabeth Church, 1 Lowell St., Seabrook Beach, NH. Burial will be private. If desired, in lieu of flowers, memorial donations may be made to the Michael J Fox Foundation P.O. Box 5014, Hagerstown, MD 21741-5014, or to Rockingham VNA and Hospice, 137 Epping Rd., Exeter, NH 03833.

Exeter &#8211; Robert F. Mullen, 83, of Exeter and formerly of Lowell, MA, passed away peacefully at his home on Wednesday, June 12, 2019 surrounded by his loving family. Bob was born in Lowell, MA on November 18, 1935, the son of the late Henry... View Obituary & Service Information

The family of Robert F. Mullen created this Life Tributes page to make it easy to share your memories.

Send flowers to the Mullen family.