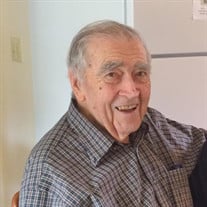 Rye, NH - We have lost another of the Greatest Generation. Robert F. O’Donnell, 101, of Rye, passed away peacefully on Sunday, July 25, 2021 at Webster at Rye where he had been living since becoming ill. Born in Portland, ME, on November 18, 1919, he was the son of Philip and Mary (Casey) O’Donnell. He attended Portland High School, graduating in 1937. During World War II, he rose to the rank of Chief Petty Officer in Naval Intelligence, serving in the Boston Naval District and overseas in England. He returned to service in the Navy during the Korean War and was stationed at the Portsmouth Navy Yard. Mr. O’Donnell retired from Amoco Oil Company in 1981 after 40 years of service. He worked in Claremont, NH, for Cal Oakes and then as an Amoco auditor covering New England, upstate NY and NJ. Later in his career, he lived in Garden City, NY and worked as an analyst for Amoco’s NY office. After retirement, he returned to NH and resided in Rye with his wife Catherine H. (Romard) O’Donnell. For 38 years, he enjoyed spending afternoons and evenings on his back porch overlooking a serene 1-acre property, which he mowed himself until age 95. At age 99, he moved to an assisted living apartment at Webster at Rye. Mr. O’Donnell was a communicant of St. Theresa Church, Rye Beach, NH. He was preceded in death by his beloved wife of 54 years, his five brothers, and several nieces and nephews. He is survived by his four children and two sons-in-law: Maureen O’Donnell and husband James Lilley of Upton, MA; Terry O’Donnell of Spokane, WA; Cathy (O’Donnell) Fomous and husband John Fomous of Arlington, VA and Margaret O’Donnell of Keene, NH, as well as several nieces. All who knew him will miss his story-telling and smiling Irish eyes. A Mass of Christian Burial will be celebrated at 11 am on Thursday, July 29, 2021 at the St. Theresa Church, 815 Central Road, Rye Beach. Burial will follow in Central Cemetery, Rye. The Mass will be live-streamed for those that can not attend in person. Click St. Theresa Live-Stream to watch. In lieu of flowers, memorial donations may be made to the Rannie Webster Foundation 795 Washington Rd., Rye, NH, 03870 .

Rye, NH - We have lost another of the Greatest Generation. Robert F. O&#8217;Donnell, 101, of Rye, passed away peacefully on Sunday, July 25, 2021 at Webster at Rye where he had been living since becoming ill. Born in Portland, ME, on November... View Obituary & Service Information

The family of Robert F. O'Donnell created this Life Tributes page to make it easy to share your memories.

Rye, NH - We have lost another of the Greatest Generation. Robert...

Send flowers to the O'Donnell family.